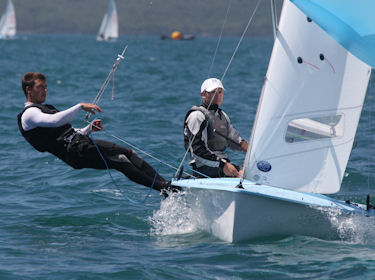 At the 2012 470 Junior Worlds, the Italian crew of Simon Sivitz Kosuta/Jas Farneti have possibly moved beyond reach after adding two more wins to their scorecard. Conditions on the Waitemata Harbour were a photographer’s dream. Blue sky, sparkling water, white caps and a moderate sea breeze, along with a fleet of young sailors concentrated on close competition provided a wonderful scene today.

The 2012 470 Junior World Championship is being hosted by Takapuna Boating Club in Auckland, New Zealand,

470 Men/Mixed
Sivitz Kosuta/Farneti are now 22 points ahead of their nearest rivals, but James Turner/Finn Drummond of New Zealand are holding off the competition snapping at their heels from across the Tasman. Following a third in the first race of the day, Turner/Drummond hit a mark and had to do turns which lost them a few places in the second race. However they still have six points on the Crawford brothers of Australia.

“They [the Italians] are going really well, they’re not unbeatable, but very good,” commented Finn Drummond, who is keen on stealing a race or two from the lead team before the event is over. “I was quite rusty initially after a year out of the 470 but as this regatta has progressed we’ve got more consistent. James is putting the boat in good positions, we have good speed and it’s going well."

Matthew and Robert Crawford were coming into contact with objects in the water themselves... after racing the Australian team were discussing 'contact' between their centre board and a shark, following the incident several coaches witnessed the shark take a few flips in the air. The boys said the shark didn't help their speed today, but they were enjoying the lighter and more stable winds.

Another sibling team, Alexandros and George Kavvas of Greece also enjoyed the sailing today, and though they are used to a variety of conditions this was their favourite. The brothers are one of the younger crews in the fleet, at 15 and 16 years of age respectively, and as such they are also one of the lighter crews.

Having moved into the class only three months ago, after sailing in the International 420 Class, they feel they have better boat handling in the light which was demonstrated by a second and a fifth placing today. The Greek brothers came to the regatta to gain experience and have a goal of finishing in the top 12, and would be even more pleased if they made it into the top ten and were able to take part in the medal race on Friday.

Bochmann/Panuschka finished the day on a high with a win which turned the tables with British crew Anna Burnet/Flora Stewart. With four more races to go it's still anyone’s game in the women's fleet, with the first four crews having bit of a jump on the remainder of the fleet.

Over the next two days four more races are scheduled, the south westerly is expected to return for a day of patchy offshore conditions, with another change in direction the following day so there is a way to go yet for the sailors.

Principal Race Officer Ian Clouston is hopeful that the wind will be coming out of the south east by Friday which would enable the race management team to lay the finish mark just off the shore which would be a fitting end to the regatta.

Video Review after Day 4 of racing