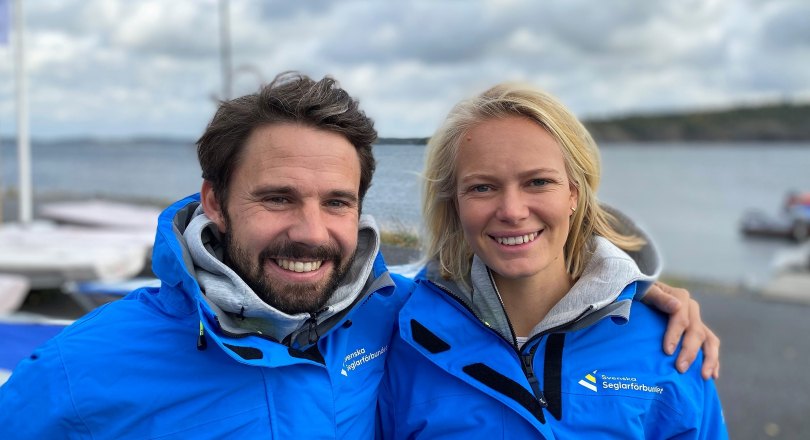 ANTON & LOVISA ON THE WAY TO PARIS 2024 OLYMPIC GAMES

Anton Dahlberg who won Olympic silver in Tokyo, together with Fredrik Bergström is now betting on the new mixed 470 class with national teammate Lovisa Karlsson.

Tokyo Olympic Games were Anton and Fredrik's last international competition together. Now the 470 women's and men's separate classes are replaced by a mixed class. And one of the most exciting crews in the new class will be Anton and Lovisa.

With 36-year-old Anton's skills and success, as a World Cup gold and Olympic silver medalist this year, in addition to four more European Championship and World Cup medals, together with 26-year-old Lovisa's experience on the 470 and her 14th place in the Olympic Games this summer, the new duo will find themselves being one of the favorites in this new Olympic class. And their goal is an Olympic gold in three years.

- We would not have gone into this, if we both did not have high ambitions. I have an Olympic silver and Lovisa also has experience from the Olympics. The fuel in this investment is the curiosity about developing together. In front of us are two major sub-goals: the WC in Israel 2022 and the WC in Holland 2023. We plan to be competitive on both of these, says Anton.

Both have many years behind them in 470. They have often trained together, not to mention that Lovisa and her former partner, Olivia Bergström, were trained by Anton's wife Alberte Lindberg.

Over the past four years, we have run our respective “sailing projects” in parallel and got to know each other in the meantime. Anton and Fredrik have been role models for me and Olivia, and we have often been in the same place and been able to exchange knowledge, says Lovisa and continues:

- It feels very fun to enter into a new team towards the Olympics in Paris with Anton. He is not only an experienced sailor with many great merits but also an energetic, positive, humble and determined person.

- It is great news for the national team that Lovisa and Anton have decided to invest together. They will initially be mentioned as one of the strongest cards in the class ahead of the next Olympics. They know each other well already now and get along well, both based on a sporting requirements profile and as a team, says national team captain Magnus Grävare but also raises a warning finger:

- We have to hurry slowly and give them the chance to get started and have both successes and some challenges along the way, before we make high demands on them.

SOK's operations manager Peter Reinebo is also happy about the new couple and their investment in Paris:

- This is incredibly positive. The exciting part with the mixed class is that we have two such strong crews. The combination with Anton's four Olympic participations and great successes in recent years, as well as Lovisa's rapid development and strong drive, has the potential to give us a powerful crew in the absolute world top. But alone will not be enough. They have to work hard to get all parts stuck together, says Peter Reinebo.