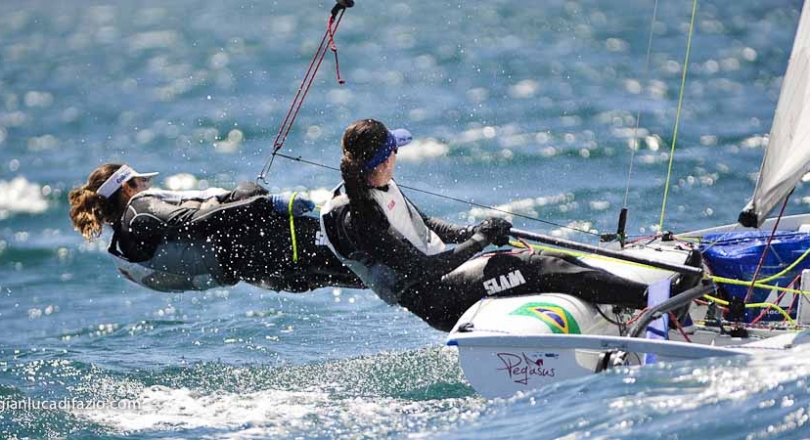 Another Day of Quality Racing at 470 Europeans

The lighter breeze played more of a role on the finishing positions of teams on race day 3 at the 470 European Championships, with some new players popping out at the top of the fleet.

The 110 teams from 35 nations have enjoyed yet another day of stunning racing conditions – it doesn’t get better than this.

470 MEN
With the Gold and Silver fleets determined after yesterday’s racing, today was onto the three-day Final Stage of six races. Up first on the track were the gold fleet and no change in the order of the leaderboard top three after racing today, with Mat Belcher/Will Ryan (AUS), Luke Patience/Joe Glanfield (GBR) and Panagotis Mantis/Pavlos Kagialis (GRE) in 1,2,3 order. 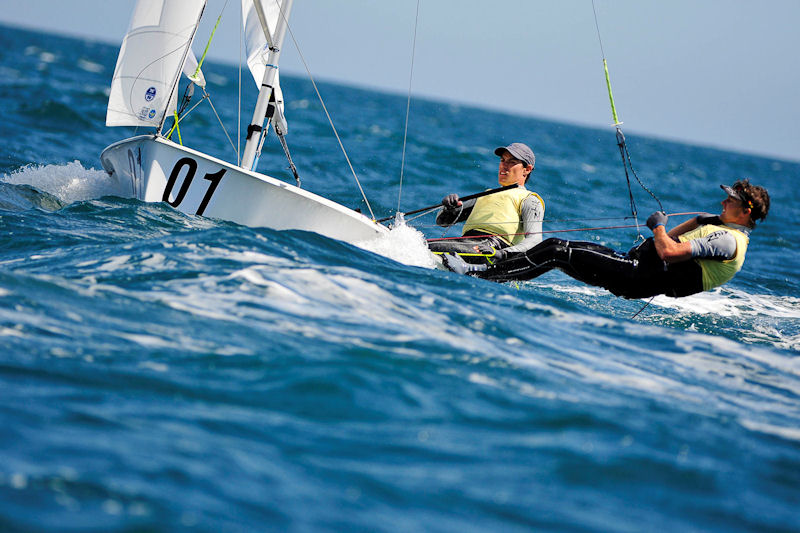 A safe and solid delivery for Belcher/Ryan who knocked out the most consistent results of the fleet, hold firm in their yellow jerseys and end the day with a 5 point margin over Great Britain’s Luke Patience/Joe Glanfield who scored an 11,4.

A total change of fortunes and form from Sweden’s Anton Dahlberg/Fredrik Bergström today. Yesterday they only just made the cut for the gold fleet, being the last of the 36 boats to advance through and on a tiebreak. Today they were leading the best 470 sailors in the world round the race track to claim a win in the opening race of the Final Stage. The early race advantage went to the young French pair of Vianney Guilbaud/Vincent Guillarm, who led the gold fleet up to the windward mark, before the Swedes accelerated downwind taking advantage of the slower speed of the French and held on to the finish. Austria’s David Bargehr/Lukas Mähr pushed hard but just couldn’t catch the Swedes, but were more than satisfied with their 2nd place finish ahead of the French in third. 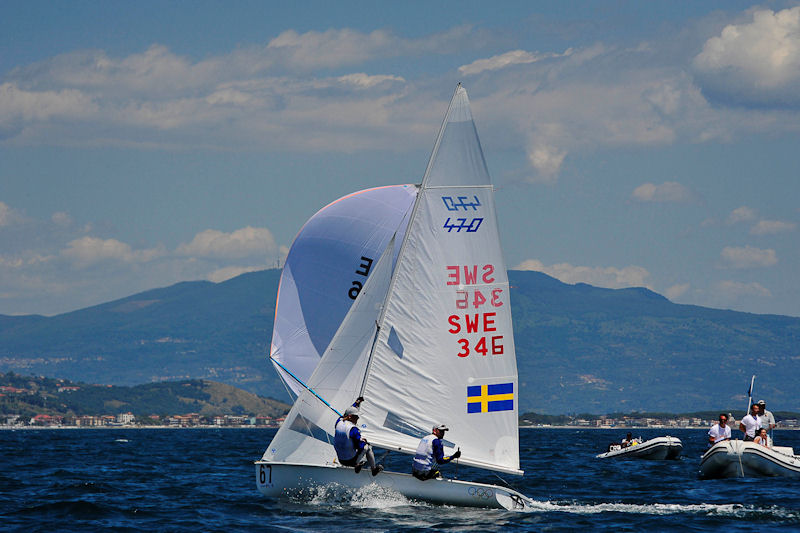 Austria’s David Bargehr/Lukas Mähr put in a really strong showing in the opening day of the Final Stage. “We are really happy. We have no pressure now as we qualified for the gold fleet. Now we can sail our race, try to improve and sailing and enjoy ourselves,” commented Bargehr, whose win has propelled the pair into 5th overall.

Onto the day’s second race, and over to Greece’s Panagotis Mantis/Pavlos Kagialis who took the lead from start to finish to claim the win, nicely balancing out their 16th place finish in the first race. This pair missed out on selection to the 2012 Olympics by the narrowest of margins last year, but are back and fighting for Rio 2016. “The first race was a bit tricky with lighter winds and all the boats went up the right side and a big shift was from the left and we were on the wrong side – it can happen,” explained Kagialis. “In the second race we had a clearer picture about the wind conditions and were very fast so won the race. We had control from the start of the race and it was a clear win.” 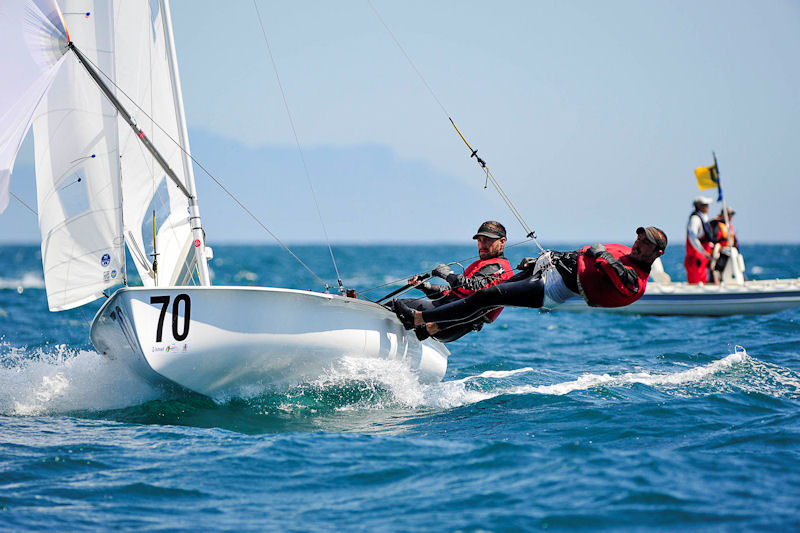 Thirty five teams are racing in the 470 Men silver fleet, which is being led by Slovenia’s Andraz Gulic/Mitja Nevecny (SLO).

470 WOMEN
All change at the front of the 470 Women fleet with Jo Aleh/Polly scoring a 12,7 to lose their yellow jersey today, which now moves onto the shoulders of defending European Champion Sophie Weguelin and crew Eilidh Mcintyre (GBR). The British pair have moved up to the top of the leaderboard, with a win from race 6 and the discard kicking in to knock out their 17th place in race 5 - and get a step closer to chasing Weguelin’s second European Championship victory. 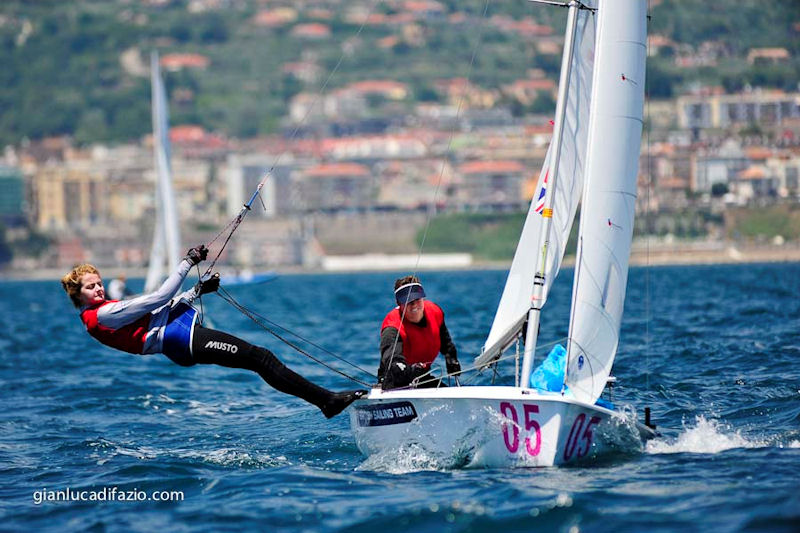 Olympic Champions Jo Aleh/Polly Powrie (NZL) seem to still be struggling to find their pace after a second day spent playing catch up with the front of the pack after a 12,7 scoreline. As Aleh acknowledged yesterday, there is not much difference between winning and being off the pace and the pair will be triple-checking the boat set up of their new steed “Gonzo” to tweak settings ahead of tomorrow.

A battle to the end in the day’s opening race 5 today, as two former team mates from Poland and Austria went head to head. The advantage ultimately went to Poland’s Agnieszka Skrzypulec/Natalia Wojcik who managed to out sail the challenge from Skrzypulec’s former crew Jola Ogar, who is now sailing for Austria with Lara Vadlau. 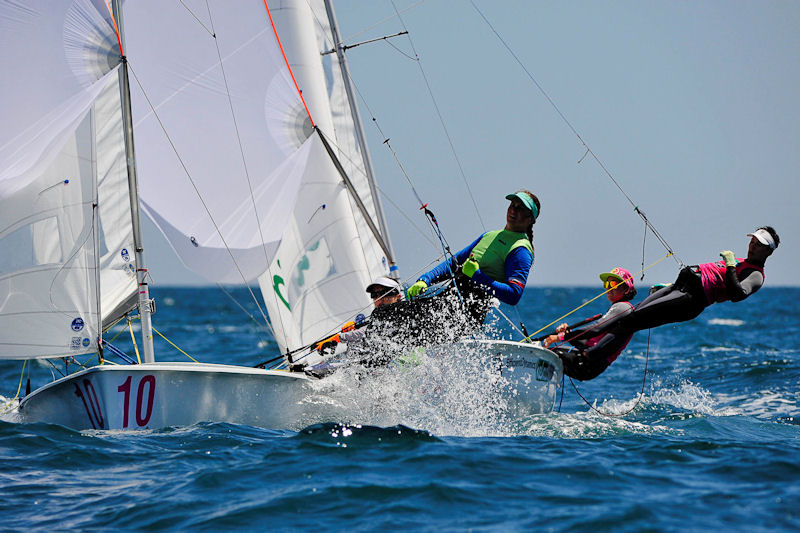 Delighted with their success today, 2012 Olympic helm Skrzypulec is looking for similar form for tomorrow’s two races, saying, “It was amazing. It was very tough and we had to fight until the last mark with the Austrian team – with my former crew. We were the only two boats and were fighting with each and finally we won so I am extremely happy with that. This is the first race we have won with my new crew, so this is the first day of our wins. We hope for the best tomorrow.”

Skrzypulec and Wojcik partnered up at the beginning of 2013, with Wojcik stepping over from an RS:X campaign to the 470. They went on to have a first leg in the second race and were top 5 in the first upwind, but lost pace downwind, an area they readily acknowledge as a weak point to finish in 9th. The Austrians claimed another second place to move up the leaderboard to fourth overall.

Commenting on the on-water rivalry with her former helm, Ogar said, “We are still really good friends and nothing has changed. I think everything is going in a good direction and Aga feels better with her new crew, because she is more calm and I think changing crew was a really good idea.” Reflecting on teaming up with Vadlau, Ogar continued, “We have a really good understanding of each other and and we have the same goals and character. We are fighters. It is great and fun to sail with Lara.” Ogar laughed as she explained the team’s goals, saying “Lara – of course Lara wants to win everything that is possible. But here we want to be in the Medal Race and be really close to a medal position and hopefully fighting for a medal.” 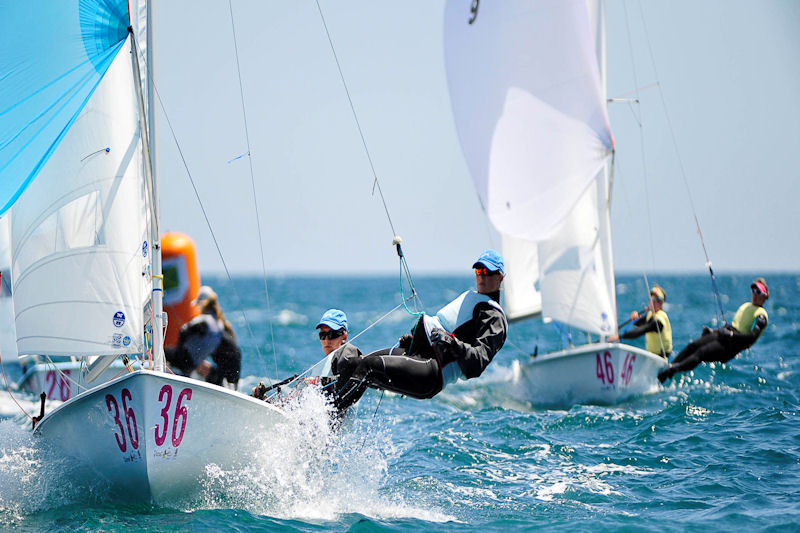 The strong racing from the Austrian and Polish teams has significantly closed their points margin to the top three on the leaderboard. A few new faces move up to the top 10 with Cassandre Blandin/Charlotte Mery De Bellegarde (FRA), Anne Haeger/Briana Provancha (USA) and Alisa Kirilyuk/Liudmila Dmitrieva (RUS) all claiming a top 5 result and aided by the race discard which kicked in for the fleet after race 5.

Images from today's racing are available on our Facebook photo gallery