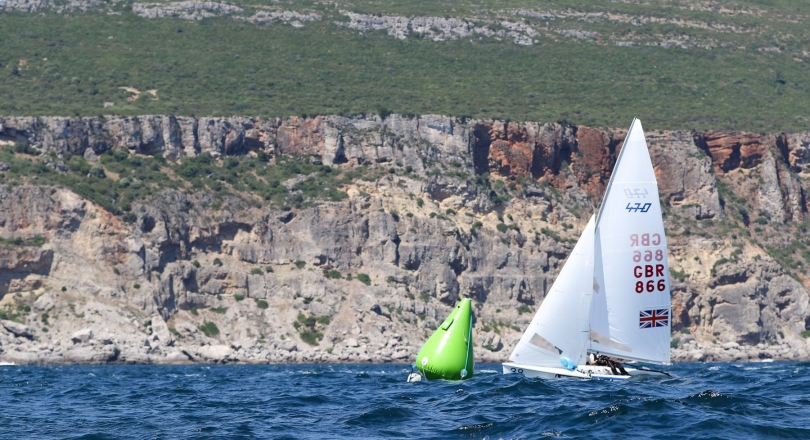 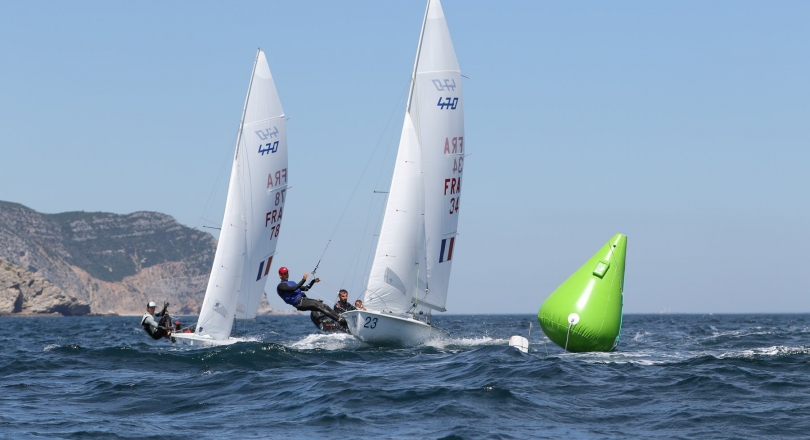 The beach here at the 420/470 Junior Europeans in Portugal is providing a stunning venue for teams from around the world.

The clean sandy beach is lapped by clear warm water, with a hot sun and blue sky blazing down. Launching is easy, with plenty of space for everyone and then a short sail out to the race track where idyllic conditions are on offer - flat water and and afternoon breeze of 12-15 knots.

The boat park and measurement/sailors tent are on Sesimbra’s beach, with the Race Office just a few steps away in the Hotel Do Mar, where many teams are also staying. The beach venue is easily generating lots of smiles and happy sailors, and bucket loads of interest from locals and holidaying tourists.

420 OPEN
420 Open overnight leaders Martín Wizner Pérez-Lafuente/Pedro Ameneiro Amezaga (ESP) picked up two 5th places and with it lost their overall lead, dropping to third overall. The open door was swiftly found by Germany’s Florian Büscher/Maximilian Büscher who stepped up to claim the yellow leader bibs from their overall scorecard of 2,2,1, but only just as they sit on tiebreak with Niamh Harper/Ross Thompson (GBR) who share exactly the same scores.

The Spanish pair wrapped up bronze at last year’s U17 420 Junior Europeans and silver in the U17 420 Worlds, so are keen to prove their dominance in in the U19 fleet too.

“We had a tragic day today with kit failure in the first race, and we most probably should have checked a bit more carefully,” said Heathcote. The pair got caught up in a pin-end bunch up in the first race, but despite crossing the start late in the trailing pack managed to find their lane and gain to 15th at the first reach before disaster struck.

Explaining the incident, Heathcote continued, “About half-way down the reach there was a bang and the kite-sheet snapped so we lost loads.”

The end result was a 25th, followed up with a 29th in the second race when they chose the wrong side of the track.

“We gained loads in both races, so we know we can do it. We need to get to the windward mark in the top 15 and then we will be ok,” anticipated Heathcote ahead of the next 8 races.

Moving up to 18th and second placed women’s team are France’s Clara Olive/Solenza Mariani, with the USA’s Michelle Lahrkamp/Gabriella Del Bello one place behind in 19th overall.

420 U17
New leaders in the U17 fleet in the form of Aussies Cole Tapper/Tyler Creevy who put on an excellent display of boat control and optimization in the oscillating wind to score 4,2. The partnership is young in age and time in the boat together, only partnering up earlier this year after competing at the 420 Worlds in Perth in separate crew combinations. They launched swiftly, winning the 2018 New Zealand 420 National Championships in March.

“We have been feeling really good and this new team is working for us,” explained Tapper. “Tyler is a very calm and controlled mind on the boat and he thinks things through, whilst I am more aggressive and loud!”

Commenting on the day’s performance, Tapper continued, “We are happy with today, but we are only one-third into the Championship, with plenty of time to go, so we will just keep building. Our strategy is more of the same, keep low scores and try not to pick up a drop early in the regatta. There is a big hill which influences the top mark, so it gets a bit tricky, but otherwise it has been really good for us. Nice shifts, challenging but fun!”

Making a significant difference to their boat speed, was Creevy’s expertise in balancing the fore and aft trim of the boat, giving a clear edge. Knowing when to hold the bow into the water and when to pump the bow out and let the boat run fast, particularly in the day’s variable wind pressure, is key.

Creevy explained, “These are my favourite conditions to be out on the wire, as it is a really consistent breeze. It is choppy at some points, but good to get the boat moving. It is really tight racing, with big decision making.”

Jacobo García García/Antoni Ripoll González (ESP) claim second overall. New faces out front in the second U17 race of the day, as Poland’s Kosmalski Patryk/Tomasz Lewandowski (POL) took out the win and pushed themselves up the leaderboard to third overall.

Moving up to claim the top women’s slot are Melina Pappa/Maria Tsamopoulou (GRE), in 8th overall, with Zofia Korsak/Karolina Cendrowska (POL) in second from their leaderboard 13th, and one place behind in 14th overall are Marina Garau Bosch/Blanca Cabot Sancho (ESP).

470 MEN
With three races for the 470 Men and Women, today was sure to see some leader board switching.

It came in the form of an outstanding read of the race track and a 3-win scorecard by Israel’s Maor Abu/Yoav Rooz, who knocked their team mates Nitai Hasson/Tal Harari down to 3rd overall. Portugal’s Gonçalo Pires/Rodolfo Pires move up to second overall.

“It wasn’t easy,” grinned Abu. “We didn’t have a good start, but we kept sailing behind the others and just kept going. I think we had good speed and when we saw that we started bad, we didn’t say ‘now we are last’, we said ‘OK we can do better’.”

The pair managed to punch through the fleet to lead by the first mark and hold on to the finish. The next two races saw more of the same, but significantly extending their finish line advantage to cross one leg ahead of the chasing pack.

“It is difficult because the wind is shifty, but finally it is strong wind so if you are fast it is good. We trained only two days before the Championship, so we are doing what we are seeing at the moment and we are not thinking of the past,” added Abu on their strategy of arriving at the Championship with little time to familiarize with the conditions.

The pair has been racing the senior fleet this year and the gains are showing, as they seek to upgrade their bronze medal from last year’s 470 Junior Europeans.

470 WOMEN
In the 470 Women, new series leaders crept through and impressively Germany dominates the top three, led by Theres Dahnke/Birte Winkel who scored 2,3,1 to end the day on tiebreak with Luise Wanser/Helena Wanser, and third to Theresa Löffler/Lena Stückl.

“It is very nice to have the 1,2,3 for us,” grinned Dahnke. “Our juniors and seniors are sailing really well at this moment and I think this is the result of our winter training,” she said in reference to the intense programme which sees German teams all training together over the winter.

“Like yesterday, it was really windy outside and very shifty in the first race. The first race was quite difficult, and at the first mark we were back in the fleet, but in the downwind we got some boats. In the other two races, yes we picked the right side of the track and we were there, that was it.

“The first ten boats are really good here, and then we have lots of new teams too, and it is super competitive,” concluded Dahnke.

Racing continues on Sunday 8 July, with a scheduled start time at 1400 hours and 2 races for all fleets. 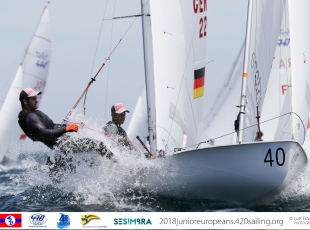 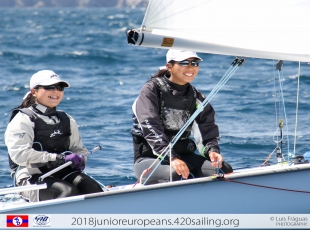 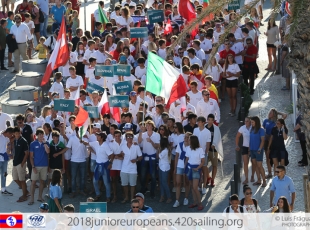