Much lighter winds brought a change of pace and a reshuffle of the pack in the women’s division at the Delta Lloyd Junior 470 World Championships in Medemblik, Holland. 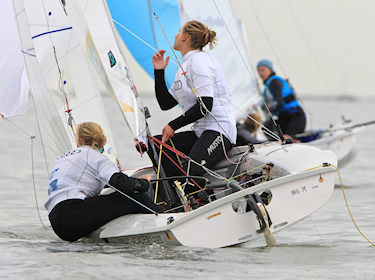 Last year’s silver medallists Annika Bochmann and Anika Lorenz have moved into the lead ahead of local Dutch team, Nina Keijzer and Anneloes van Veen. The German team won one of today’s three races, and the other two were won by their compatriots, reigning Junior 470 World Champions Victoria Jurczok and Josephine Bach.

Jurczok was relieved the strong winds of the past few days had given way to something lighter, albeit at times it was barely windy enough to fill spinnakers. “We are a little bit too light and also too small, so we sail better in light and medium winds,” said Jurczok, now within striking distance of the podium. “I think the whole day the wind was shifting to the left and before every start we were watching what was going on on the water. We had very good starts, especially in the first and in the second races today, so we could decide where to go. The American girls were the fastest today, but we sailed well, made good decisions and good starts.”

Sasha Ryan and Chelsea Hall from Australia moved into the top five with solid scores of 2,6,9. “We enjoy the strong wind, it’s a bit more exciting, but the light wind today was just as good, and we try to adapt to any conditions. Today our strategy kept changing as the wind was all over the place - so you just had to adapt your strategy to the boats and wind around you, and sail into the pressure and then tack. There are 13 races altogether so it’s a big series. We are just trying to get fast and keep consistent at the moment.”

There was less place changing at the front of the Mens/Mixed Fleet but still plenty of drama. Phil Sparks and David Kohler hang on to their overall lead although, after a black flag disqualification and a yellow flag penalty from an umpire for being judged over-exuberant with the spinnaker sheets, the Brits have their backs against the wall.

“In the first race we were tacking loads, trying to find our way through the shifts,” said Sparks, a former ISAF Youth World Champion. “We got a black flag and a yellow flag later on. The judge told to us that we were fanning the spinnaker and playing with the spinnaker sheets. There were about 3-4 knots as the wind dropped in that moment and in those conditions it’s impossible to do this as there is no pressure in the sheets. But we can’t do anything about it as there is no way to protest against the decision of a judge who gives you a yellow flag.”

There was a fair bit of controversy about the use of the yellow flag today, and tomorrow there will be a presentation about Rule 42 made by jury member Pat Healy. It’s likely to be a well-attended meeting.

The British team holds the lead with 7 points, currently discarding the BFD disqualification. The Swedish team of Nicklas Dackhammar and Fredrik Bergstrom sit on 8 points overall, but with a much nicer discard, a 6th place from today’s second race. The Brits can’t afford to slip on any more black or yellow banana skins.

Kevin Peponnet and Julien Lebrun had a solid but unspectacular day to cling on to 3rd overall, although the French now have two teams breathing down their necks. Vasileas Papoutsoglou and John Orfanos move into 4th overall with scores of 3,1 helping their cause. “It was difficult today but we sailed very well,” said Papoutsoglou. “We were very fast, even if these aren’t our favourite conditions as we prefer the stronger wind. But we are very happy with the result.”

Best performance of the day was the 2,1 scored by French team Sacha Pelisson and Nicolas Rossi, now in 5th overall. “There was some luck involved,” admitted Pelisson. “We didn’t have a strict tactical plan before the starts and we adapted our strategy during the race, trying to search for the pressure and to go where there was more wind. We tried to minimise the risks. We didn’t have very good starts as we had the black flag up for the first race and the individual recall flag up for the second, but we started with clear air. The course was quite long so it was important to keep your patience and to wait for good moments to act. I think we managed to do this today very well so we are happy with our results.”

After the serious racing, the sailors let their hair down with something a little less formal, some Optimist racing inside the marina. And this time there were no yellow flags in play. Artificial propulsion was permitted, and used in abundance.