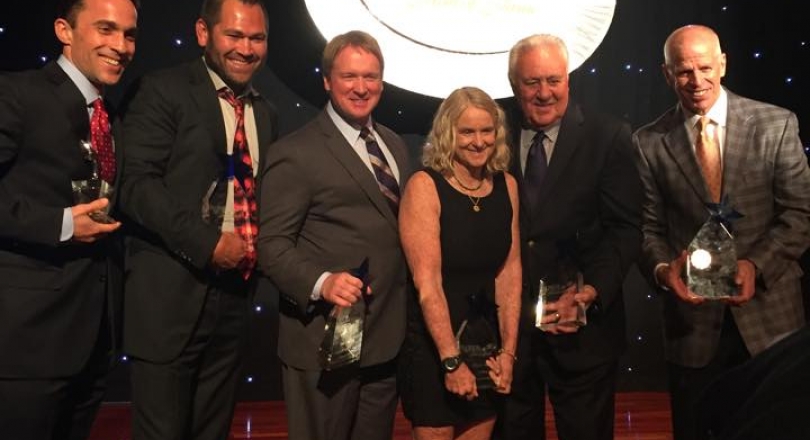 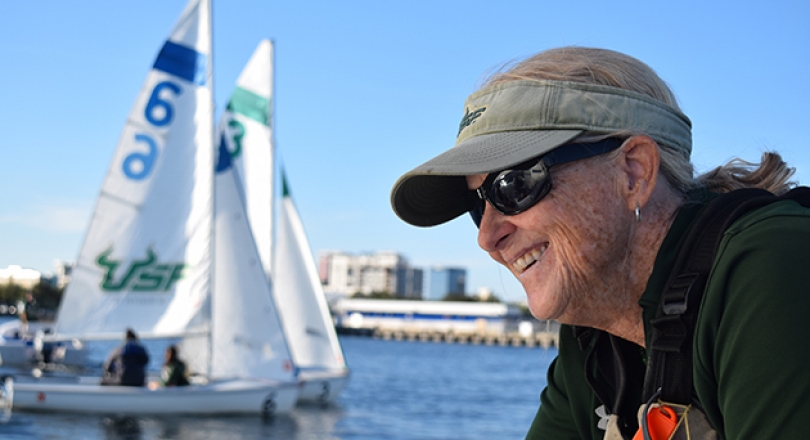 University of South Florida head sailing coach Allison Jolly has been elected to the Florida Sports Hall of Fame, in an announcement made by the organization.

Out on the water, there’s not much that bothers USF sailing coach Allison Jolly.

Excluding the occasional visit from the team’s next door neighbors.

“If you get within 100 feet of any of their properties or boats, they come out with the guns pointed at you,” Jolly said. “It’s kind of intimidating.”

Aside from the rare visit from the team’s protective Coast Guard neighbors, Jolly’s 13 years leading the Bulls in her own backyard have been nothing short of smooth sailing.

Since taking over USF’s sailing program in 2004, Jolly has led the Bulls to 12 straight appearances in the Inter-collegiate Sailing Association Women’s Dinghy Nationals every year since 2005, returning to the same waters in which she learned to sail at the age of 9.

After over a decade into her collegiate coaching career at USF, Jolly is set to be recognized as one of the state’s greatest champions with an induction into the Florida Sports Hall of Fame on Tuesday.

Jolly’s commitment to not only the sport of sailing, but her legacy as a teacher and mentor has led her to be elected to this year’s class that includes former Tampa Bay Buccaneers and Super Bowl-winning head coach Jon Gruden and Hockey Hall of Fame inductee Phil Esposito.

A bay area native, Jolly was born only a few miles from the Haney Landing Sailing Center at USF’s St. Petersburg campus.

As a child, Jolly originally took up swimming to beat the Florida heat. After realizing she was more competitive than other swimmers, her parents encouraged her to continue competing on the water any way she could. Before long, she was on her first dinghy.

Jolly knew instantly she was where she needed to be.

“One summer my parents put me in this Learn to Sail program and I … did well right away,” Jolly said. “I realized then this was the sport for me.”

Raised by Tampa-born parents, Jolly’s roots run deep in the bay area. The namesake of the Harvard & Jolly consulting firm, Jolly’s father was a key figure in the development of the St. Petersburg Public Library, St. Joseph’s Hospital and the inverted pyramid design of the old St. Petersburg Pier.

Jolly, who originally wanted to be an architect like her father, instead graduated from Florida State University with a degree in chemistry.

While in Tallahassee, Jolly would go on to win two Intercollegiate National Championships in 1976 and ’77 and became the youngest woman to win the U.S. Yachtswoman of the Year Award in 1976 at the age of 20.

Jolly would go on to win the award again in 1988, a year that would turn out to be the climax of her sailing career.

Competing in the first women’s sailing event in Olympic history, Jolly and partner Lynne Jewell won the gold medal for the United States in a moment Jolly thinks about quite often.

Even more impressive is the fact that Jolly climbed to the top of her sport while suffering from keratoconus, a condition that has caused Jolly to be legally blind in her left eye since the 3rd grade.

“What I think about (on the medal stand) honestly is ‘wow, there is sand or something in my eye, and my contact lens is killing me’,” Jolly said.

“Everyone said it was so cool that you looked like you had tears of joy … when actually the smallest grain of sand got up under my contact, and that’s all I thought about the entire ceremony.”

Jolly said the most important takeaway from her Olympic experience that she still imparts on her sailors today is the importance of finding the right partner on the water.

“When you’re sailing a double-handed boat, you need to find the right person to compliment you,” Jolly said.

“Lynne and I worked well together because we were just so opposite. But when you are opposite, you have to be able to realize that we don’t think the same. We don’t do things the same, but it’s still important that we work together as a team because she’s bringing everything to the table that I don’t have. It’s tricky, and you have to have the right mindset to make it work.”

Following a regular season highlighted by a second place finish in the SAISA Women’s Fall Championship and a sixth place result in the Charleston Open, USF will wrap up the 2016 fall season when it competes in the AAC Women’s Championship in Charleston, South Carolina, beginning Saturday.

One Bull who Jolly trusts to jell with teammates the way she and Jewell did in Seoul is fifth-year senior captain and mechanical engineering major Megan Hostetter.

Hostetter, who commutes everyday from USF’s Tampa campus to practice in St. Petersburg, gladly makes the drive to learn under a woman who she credits in making her the sailor and student she is today.

“She is a wealth of knowledge to say the least,” Hostetter said.

“I take the most away from her interpersonal skills, how she can easily communicate with so many different personalities on the team. Her ability to talk to different types of people and explain one thing in so many different ways so that so many people can understand it is truly breathtaking.”

Jolly not only has the respect of her team, but the love and admiration of those lucky enough to learn from the Olympic hero.

“It really does speak to her experience not only with people, but as a coach and how much she really does mean to all of us,” Hostetter said.

“I really don’t think there is another coach out there with the amount of knowledge, the amount of interpersonal skills, and the amount of pure coaching ability that she does. I couldn’t ask for a better coach.”

With the conference championship race and a Hall of Fame induction on the horizon, Jolly has an idea of how long she would like to remain at the helm of the USF sailing.

“Until they kick me out.”