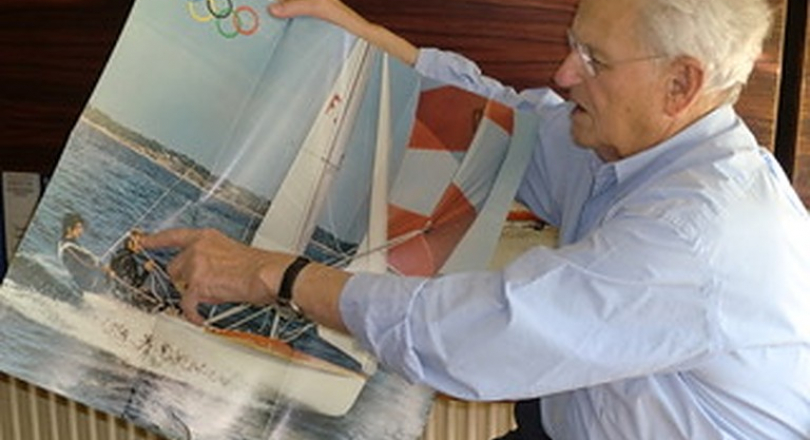 A HOMMAGE TO JEAN MORIN

Jean Morin was, together with the naval architect André Cornu, the co-creator of the fabulous 470 that we all love.

As a carpenter cabinet maker, he had taken over his father’s activities in his workshop located at the bottom of the garden at the family property in Pessac, near Bordeaux (France). Faced with the explosion of dinghy sailing in France in the 50’s, he decided to use his skills and his workshop to build small wooden boats. At the very start of the 60’s, he learned how to master the new  technique of building boats with glass fibre and resin. He thus equipped his “best seller”, the wooden Mousse, a small 3,90 m dinghy, with a plastic hull and would go on to create boats with modern moulded hulls, without hard chines, like the single handed R9M. His boatyard became the direct competitor of Lucien Lanaverre who since 1960 had been building not far from there the brand new 420. Jean Morin then had an obsession : to build a modern better performing two- handed dinghy.

André Cornu and Jean Morin knew each other well. At the Paris Boat Show in 1962, André Cornu dropped by to see Jean Morin on his stand and said : “Jean, I’ve designed a dinghy that’s  between the 420 and the 505 measuring 4,70 m, would you like to build it ?”. Jean’s response   was immediate and in the following Spring the first 470 was launched at Grand Piquey on the Arcachon basin. In the summer of 1963, André Cornu and Jean Morin presented their new boat to the main french sailing clubs. The 470 had an enthusiastic reception : a star of sailing had been born. Production started in October 1963 and orders flowed in.

Jean Morin didn’t leave the promotion of his 470 at that. He sailed with Jean-Claude Cornu, André’s son. Jean-Claude was an accomplished helmsman : he had been a World Champion in the 505 and had been selected to represent France for the 1960 Games in FD. Together they toured France and the neighboring countries to participate in events organised by journalists that were designed to compare the diﬀerent classes of boats. Each time the 470 came out in excellent position.

His experience in building the 470 made Jean Morin an unavoidable actor in the life of the boat. As such he made numerous propositions to the 470 association to help the 470 evolve towards better constructibility and durability.

Faced with more competition, which started in 1966 with the approval of new boatyards in Europe, Jean Morin ensured the promotion of his 470 via the best French crews, for whom he kept his best hulls and oﬀered special prices. In 1972, when I ordered a new 470, he said to me : “I am building a 470 with the same colours for the Follenfant brothers”, one of the best crews at the time, “we’ll build both at the same time, like that you’ll get a top boat as well”. The Follenfant brothers obtained excellent results with their boat, not me, which shows that it’s not just about equipment … but the person who bought my boat in 1977 is still using it today !

Aware that the 470 also needed to develop outside Europe, in 1972 he did not hesitate to oﬀer to ship thirty boats at his own cost to Montreal which were made available to European crews participating in the first world championships outside Europe. He banked on the hope that the 470’s would find local takers at the end of the championship : it proved to be a good bet !

In 1976, Jean Morin turned the page on his involvement with the 470. He became a property developer in the Pyrenees. His first two residences were called “Montreal 1” and “Montreal 2” in memory of the first Olympic Games which welcomed the 470 in 1976, so it wasn’t by pure invention !
He stopped all professional activity in the 90’s, when he was nearly 70 years old.

In the autumn of 2011, when Nicolas Guichet and myself were writing the 470 Great Book, we went to visit Jean Morin at his home. I hadn’t seen him since 1976. He was then 83, still in good shape and remained possessed by the 470. His immense oﬃce was full of documents and photos linked to the boat that he had given birth to and which he had helped to develop. During the   whole day, he never stopped relating his perfect memories of the period and his pride in having been one of the key actors of its success. He told us how, when restoring Morin 470’s, that he   tried to share his passion and memories with his grand-children.

Enthralled by our visit, he did not hesitate an instant when the 470 Internationale invited him to the 50th Anniversary celebrations of the Class at La Rochelle in 2013. He took great pleasure in describing to all the guests present the birth of the 470 and the important part that he played in it.

A few weeks later, he sent me a copy of the 470 Great Book in which he had glued a preface that he had written about his adventure with the 470. He concluded the preface with the words : “ … perhaps again soon for the 60th anniversary”. Fate decided otherwise and Jean Morin left us on 1st March 2021 at 93 years old. His life’s work is still here and will permanently remind us that it’s a lot thanks to him that it is still here.

The whole 470 family extends its sincere condolences to his wife, Hugette, to his children and grandchildren.