A Good Day For The Greeks 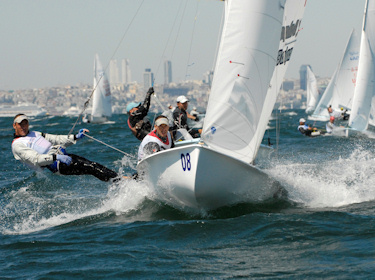 As the 2010 Open 470 European Championships shifted from the qualification stage to the finals, the Greek teams moved up the rankings.

In the morning the two men’s qualifying fleets headed out to decide their final of six heats before they were reshuffled into Gold and Silver for the finals.

It was light, medium, strong all at the same time, depending on where you were on the race course, as the breeze poured over the top of the high-rise flats on the Asian side of Istanbul. Massive wind shifts meant no one could ever consider themselves safe. However Stuart McNay and Graham Biehl of the USA took an early lead in their heat, and held their nerve for victory.

In the other fleet, French team Sofian Bouvet and Jeremie Mion finally showed some of the form that has won them every major Junior 470 title, winning their side of the draw. However, after retiring from a race yesterday with a broken mast, that qualifying race win was still not sufficient to drag the young French up into the Gold fleet. “Now we have to see if we can win the Silver fleet,” said Mion, who went on to win the first race of Silver and now lies in second, a point behind the Silver leaders, Joonas and Niklas Lindgren from Finland.

At the end of qualifying, defending European Champions Sime Fantela and Igor Marenic of Croatia had moved into a narrow lead, and then the men’s fleet relaxed ashore during the early afternoon while some protests were heard.

Meanwhile the women were out on the water battling through three long and gruelling races. At the end of those three races, the reigning European Champions, Giulia Conti and Giovanna Micol of Italy are still leading, but not by as much as they might have hoped. They started well enough with a 1,2, but fell from grace in the final, windiest race of the day with a 17th. Although they can discard this result at the moment, the Italians have been forced to count a 16th from the first race of the regatta. “We didn’t start the race so well, we weren’t that fast, and we got held up from hoisting the spinnaker on the first reach,” explained Micol. “But still we are 10 points ahead of the Danish and so really we should be happy.”

The Danish team of Henriette Koch and Lene Sommer moved up to 2nd overall with a solid day in very challenging conditions. “It was about being in the right place at the right time, using the pressure when you could find it. You had to sail your own race but stay with the fleet too,” said Koch.

Aside from the Italians, the other two race winners in the women’s fleet were a mix of the young and the not so young. Former Optimist World Champion Tina Lutz, sailing with Susann Beucke, won the seventh race of the series by a country mile. These two German sailors are still young enough to be racing in 470 Junior competition but this year have been focusing on the big senior regattas.

Meanwhile the Austrian team of Sylvia Vogl and Carolina Flatscher are dipping their toe back into 470 racing after taking more than a year’s break. The lay-off seems to have done them little harm, as the veterans led round the first mark of today’s final race, hoisted their spinnaker and shot down the track. They got a bit worried when no one was hoisting behind them. “Sylvia kept asking me if we were sailing to the right mark,” said Flatscher, “but luckily we were going in the right direction and we extended the gap.” The conservatism of the rest of the fleet played into the hands of the Austrians, which was just as well for them. On the second upwind leg, their mast puller broke and they could no longer control the mast as they would like, and they started slowing down. Even so, they held on to win the race and now move up to 6th overall. 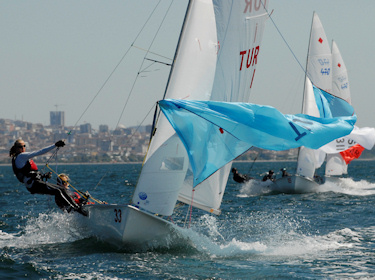 In the afternoon, with the men’s fleet divided into Gold and Silver, the men set about racing in the strong and shifty breezes blasting off the Istanbul shore. Some likened it to the Meltemi breeze of Athens, which is perhaps why the Greeks looked so good today. After the three-bullet dominance of British sailors Luke Patience and Stuart Bithell yesterday, the scores over the last five races of 1,2,2,1,2 are now starting to make Panagiotis Mantis and Pavlos Kagialis look like the class act of Istanbul. They have now moved to the top of the leaderboard, displacing the Croatians by a single point.

The Israeli team, Gideon Kliger and Eran Sela, hold third place but breathing hard down their necks is another Greek team in fourth overall, Panagiotis Kampouridis and Theodoros Polychronidis, thanks to 2,3 scores in this afternoon’s Gold fleet racing.

“A great day,” said Pavlos Kagialis. “We had good speed, we enjoyed the shifty breeze, and if you are fast it becomes easier. We like the strong winds, we like it very much. Good fun. It is great that our team mates are doing well too. We have the same coach and we train together all the time.”

Just as the Austrian girls profited from the excess caution of their rivals down the spinnaker reach, so too did the Greeks throw caution to the wind, hoisting their spinnakers immediately and sailing underneath and through their less daring competitors. Where some sailors looked out of sorts in the massively windy and shifty breezes, the Greeks looked right at home. But with just 15 points separating the top seven, Istanbul has plenty more surprises in store over the coming days.

With the racing now back on schedule, tomorrow the race committee plans to hold two races for all fleets, starting at 1300 hours local time.

The 2010 Open 470 European Championships conclude with the Medal Race on 6 September. The regatta is organised by The Istanbul Sailing Club in co-operation with the International 470 Class Association and the Turkish Sailing Federation.