A Complicated Day Suits Some 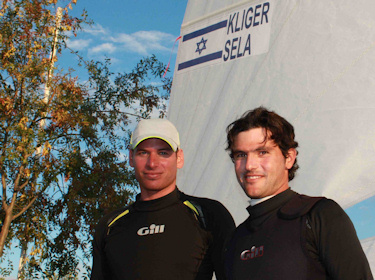 It was a crazy, confusing day at the 2010 Open 470 European Championships in Istanbul, yet somehow Gideon Kliger and Eran Sela emerged from their side of the men’s qualifying with two first places.

The Israeli team made sense of the light, patchy and shifty conditions that left most of the 92 teams quite bewildered. The day dawned 10 degrees colder than previous days, the blazing hot Turkish weather replaced by a rainy, blustery, grey day that made some competitors wonder if they had been teleported back to Weymouth in England, where many of these same Olympic athletes were competing just two weeks ago. 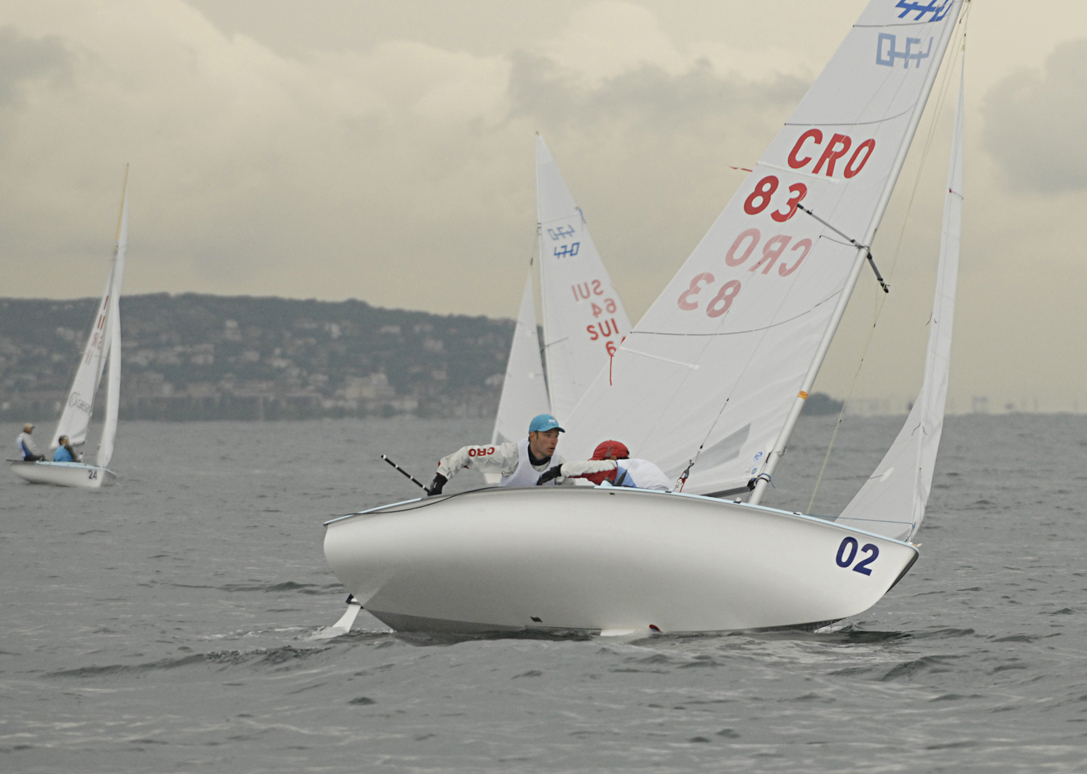 As August gave way to September, and summer gave way to autumn, it looked as though the 470s would be battling their way round the course in some fierce conditions. Yet by the time the 470s were getting on the water for a 1300 hours start, the wind was already ebbing away, to the point where the first race had to be postponed.

Even when the first race did get under way, the breeze refused to cooperate and it had to be abandoned. Eventually the race committee successfully restarted the race and held another one straight afterwards, although the sun was already setting over the Istanbul skyline by the time the boats returned to shore.

It was a very mixed set of emotions from the sailors as they came home. Kliger and Sela were quietly pleased with their day, saying that the key to their success was not to overcomplicate things on a complicated day. “We focused on the simple things,” said Kliger, one of the most experienced and accomplished sailors in the fleet. “We didn’t try too hard or think too hard. When it’s irregular and chaotic like it was today, you just aim to do your best and see what happens. But for sure we were lucky too.”

Maybe it was the luck of the number 7 that played its part. In the first heat, it was the Israelis, ISR 7, who crossed the line ahead of NED 77, Steven Lefevre and Steven Krol of the Netherlands, followed by FRA 7, sailed by Olympic bronze medallist Nicholas Charbonnier and Baptiste Meyer-Dieu of France.

The only team that came close to matching the Israelis’ consistency were the defending European Champions from Croatia, Sime Fantela and Igor Marenic, who scored two second places on the other side of the qualifying split. Other leading lights, such as the USA’s Stuart McNay/ Graham Biehl and GBR’s Luke Patience/ Stuart Bithell, fell foul of the black flag. “It’s the one thing you don’t - or shouldn’t - do,” said Patience as he berated himself afterwards. “We didn’t think we were over, but we were, so that’s that.” At least the Brits made amends with a victory in the second heat, passing the Croatians who had led for the first half of the race. 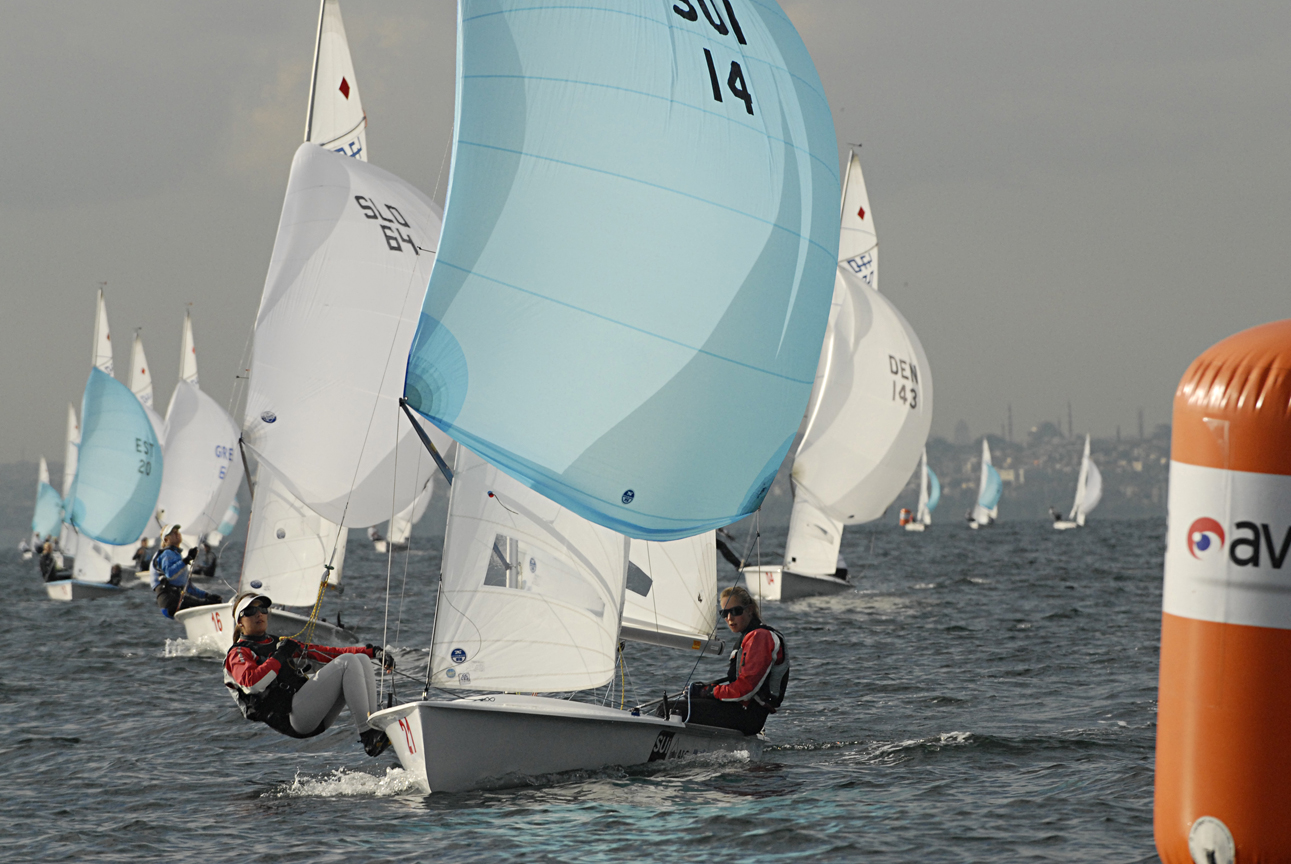 While the defending men’s European Champions had made a solid start, the defending women had a day more like Patience and Bithell’s. Italy’s Giulia Conti and Giovanna Micol have high hopes of winning here, but suffered a disastrous start to the regatta, as Conti recalled: “At the first leeward mark we were third, and then the spinnaker halyard jammed and we had to sail upwind for two minutes with the spinnaker still fully hoisted, so we lost some boats there. A couple of tactical mistakes and we went further behind, then the spinnaker broke on the reach, then we touched the gybe mark and had to do a 360 penalty and we ended up.... I don’t know where. To have all this happen in one race is very strange, but I hope that means we’ve got it all out of the way for the rest of the regatta.”

Those multiple setbacks did little to put the Italians off their stride, however, as they bounced back to win the next race quite comfortably after a left-hand windshift turned the course into what Conti described as “a horse race”. Queens of the day, however, were Emanuelle Rol and Helene Defrance who scored 1,3. “We have good speed in these conditions, so we had confidence,” said Defrance, who now wonders if a podium finish in Istanbul might be possible for this still quite new team.

In second place in the women’s fleet are another French pair, Camille Lecointre and Mathilde Geron, with Denmark’s Henriette Koch and Lene Sommer in third.

With the race committee still looking to get back on schedule after no racing yesterday, the start time for tomorrow has been brought forward to 1100 hours, with the hope of completing three back-to-back races.

The 2010 Open 470 European Championships take place from 31 August conclude with the Medal Race on 6 September. The regatta is organised by The Istanbul Sailing Club in co-operation with the International 470 Class Association and the Turkish Sailing Federation.