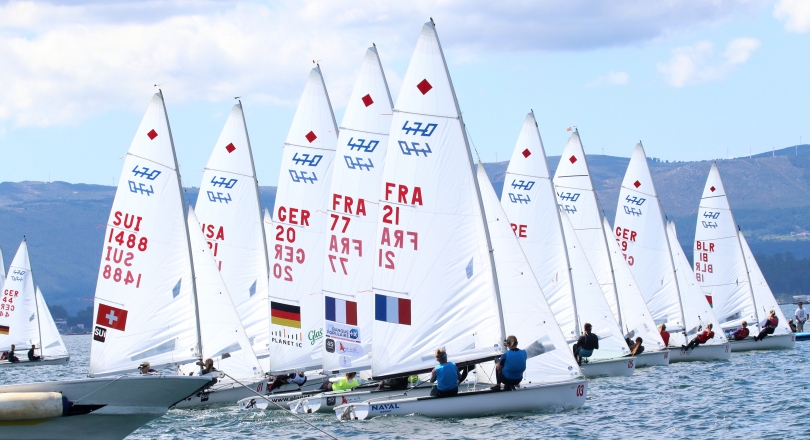 Nikolaos Brilakis and Nikolaos Georgakopoulos (Piraeus Sailing Club) are the leaders of the Men/Mixed  fleet after scoring 6th and 10th in today’s races. With the conditions of today, light wind of 9 knots, they look determined to fight for the Gold.

Second on the overall are the Germans, Lucas Schlüter y Frederick Eichorst (Postdamer Yacht Club), who were 1st and 14th today. With 29 points they are only one point behind the Greeks. The French Jerome Demange y Luc Guimbertaud (85034 CNHR), who were leaders until yesterday, are now third, after scoring 3rd and 17th today.

The other victory of the day was signed by the French boat crewed by Yves Mermod y Cyril Schüpbach (Thunersee-Yachtclub), who have got into the top-ten in the overall.

The British Vita Heathcote y Ryan Orr continue leading the Mixed category with 47 points and tied with the Italians Andrea Totis (LNI Mandello) y Alice Linussi (Società Velica di Barcola e Grignano), after a day that was bad for the Brits (11th and 22nd) and good for the Italians (4th and 5th).

In 470 Women, Theres Dahnke y Birte Winkel (Plauer Wassersportverein e.V./Schweriner-Yachtclub) continued their trend, finishing 1st in the two races of the day while the Wanser sisters, Luise and Helena, scored 2nd in both races but getting farther from the leaders (11 points to 18). What is not arguable is that this 470 Women Youth European Championship is ruled by the Germans.