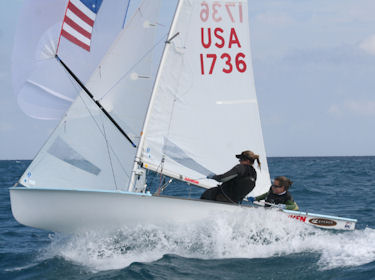 Nothing says elite-level competition like US SAILING’s Rolex Miami OCR, which returns to Coconut Grove, Florida for its 22nd time from 23-29 January, bringing together the world’s top sailing athletes for competition in the classes selected for the 2012 Olympic and Paralympic Games.

Held on Biscayne Bay, this prestigious event is the second stop on the International Sailing Federation’s (ISAF) Sailing World Cup 2010-2011 circuit, and as such has already registered over 800 sailors from 52 countries.

“Most athletes training for the 2012 Olympics or Paralympics will say they don’t want to peak just yet,” said US SAILING High Performance Director Kenneth Andreasen (Tampa, Fla.), “but you can bet the sailors here will be very serious about being in the top five, if not winning, in their classes and accumulating points toward their standings in the ISAF Sailing World Cup circuit, which affects their world rankings.” Andreasen added that no less than 30 US Sailing Team AlphaGraphics members are competing, while other U.S. sailors will be named to the team based on their finishes here.  “From all over the world, there will be athletes who are either already on their national teams or aspiring to be named to them,” said Andreasen, “and there will be dozens upon dozens of national team coaches and private coaches attending.”

Not to mention a slew of Olympic and world champions.

470 Men
Mathew Belcher and Malcolm Page (AUS), sailing in the Men’s 470 class, are the reigning ISAF Sailing World Cup and 470 World Champions as well as being ranked #1 in the world. They have also just won the 2011 470 North American Championships. Page is also the reigning Olympic Gold Medallist, winning with helm Nathan Wilmot in Beijing 2008.

“It certainly is a nice feeling to know that you are on the right track; however, sport is sport, and there are a lot of top guys right there also,” said Belcher. “This year at the Rolex Miami OCR, I think we have everyone in the top 10 in the world here from the 470 men’s class.”

If it is by resume that Belcher and Page are favorites in the Men’s 470 class, then also keep an eye for the rookies in the fleet, those teams who as yet are unranked in the world. There are ten of them taking to the waters in Miami. Some of those teams, including new pairings from Puerto Rico and Venezuela have got in some critical training at the 2011 470 North American Championships which concluded last week.

Canada and the USA have the largest teams competing at Rolex Miami OCR, with 5 and 9 teams apiece.

Most of the teams are familiar with the weather conditions offered by the waters of Miami and there will for sure be some jostling for the podium places. For Belcher/Page the Rolex Miami OCR title has eluded them so far, maybe 2011 will be their year.

470 Women
The women's fleet is headed up by world #1 pairing of Ingrid Petitjean and Nadege Douroux (FRA) who finished second in Miami last year, although were victors in 2006. They are going to face some seriously tough competition from the other 470 women's teams representing 13 nations, who will all be keen to settle some scores in the first ISAF Sailing World Cup event of 2011.

Much of that challenge will come from their team mates, world #2 team Emmanuelle Rol and Helene Defrance and world #4 team Camille Lecointre and Mathilde Geron. Rol and Defrance concluded their 2010 season by winning the 2010 470 European Championships and opened their 2011 season by winning last week's 2011 470 North American Championships – they are on a roll and performing. It will be interesting to see how the week unfolds for these three French teams.

The World ranked #10 team of Amanda Clark and Sarah Chin (USA) are the reigning Miami OCR title holders and will be looking for another victory in Miami, as they step up their campaign to represent the USA for the second time at an Olympic Games in 2012. The team placed twelth overall at the 2008 Olympic Sailing Competition, A team intent on securing that privilege for themselves are Erin Maxwell and Isabelle Farrar (USA) who sit just two places behind them on the world rankings at #12.

Three British teams are competing in Miami, with perhaps the best known of the helms being Sarah Ayton who made her debut competitive appearance in the 470 at last year's Rolex Miami OCR. Sarah with crew Saskia Clark has gone on to secure a slate of top 20 results from every event contested last year and the pair are ranked at #21 in the World and climbing. Sarah is a double-Olympic gold medallist in the women's keelboat from 2004 and 2008, but has since the opted to make the move to the 470. From a world rankings scorecard the pair are the lowest ranked of the three British women's 470 teams competing in Miami, but don't let that give any slight to the measure of what they have the potential to deliver.

For fleet racing in the Olympic classes, the regatta will consist of a five-day opening series (Monday – Friday) and a double-point medal race (Saturday). The top 10 finishers in the opening series of each class will advance to the medal race. For match racing (Elliot 6m), which makes its debut in the 2012 Olympic Games, the regatta will consist of an opening series, a knockout series, and a sail-off for boats not advancing to the knockout series. Competitors in the Paralympic classes will have five days of fleet racing (Monday-Friday) and no medal race. Medals will be awarded to the top three boats in each Olympic and Paralympic class on Saturday, January 29.