A deciding day on the water for the forty eight women’s teams competing in the 470 event for 2011 470 World Championship glory, nation qualification to the Olympics and for many teams what was a selection event to determine who will carry their country flag on the start line of the 2012 Olympic Sailing Competition. 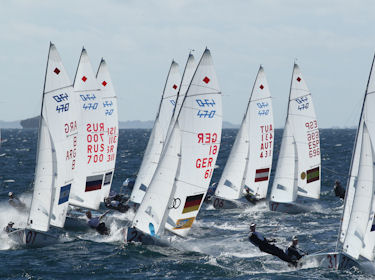 Alongside delivering their best on the race course, these athletes have a whole load of other pressures, which for many is the culmination of years of hard work. Success for some, utter dejection for others. Based on yesterday’s results, some teams were going to the Olympic Games and today they are not – a draining and painful experience.

Perfect sailing conditions were on Success Course with a breeze averaging between 14-17 knots under a blue sky. Race 9 got underway after one general recall and it was series leaders Tara Pacheco/Berta Betanzos of Spain who set the pace around the first two marks, before the lead went to Jo Aleh/Olivia Powrie (NZL) then to the Aussies Elise Rechichi/Belinda Stowell before transferring back for a race win to New Zealand, Spain second, Australia third.

Race 10 was a clean start and saw domination from the British team of Hannah Mills/Saskia Clark, pushed hard by Penny Clark/Katrina Hughes (GBR) and Martine Grael/Isabel Swan (BRA) in second and third respectively.

By the end of today, Spain’s rock steady pairing of Tara Pacheco/Berta Betanzos remain at the front of the fleet, although a 16th place finish in race 10 upset any guarantee of ending the Championship in a podium position. Any of the top four placed teams could secure the gold medal. Any of the top six teams have the possibility of securing a medal, so tomorrow’s deciding race is going to deliver tension and excitement when it gets underway at 1310 hours on Centre Course, with a live television broadcast.

Consistent form has positioned Gil Cohen/Vered Buskila from Israel up into second overall going into the Medal Race. A relieved Buskila said after their 9,4 results today, “First of all I am very happy for the result. Second of all it was quite a chaotic and nerve wracking day. In the first race we had a very good position to finish in the top 3 or top 5 maybe, but it felt like we did not have good speed and nothing came very easily and some boats caught up. That made us concentrate on defence and not on attacking the boats in front, which meant we finished 9th just. The next race we started really bad, everyone went left and we decided to go right. We then had great speed and flew up into the top 5.” Now with a seven point deficit to the Spanish, Cohen/Buskila will need to have five boats between them to secure the gold medal in Sunday’s Medal Race. “It is amazing to think we could get the gold medal tomorrow. Our aim was to get the gold medal but sometimes you aim but you are not always very confident. We know that we have the ability in these conditions but I am very, very happy with the position before the medal race,” concluded Buskila.

After moving up into second overall after their race 9 win, an unlucky 13 finish in race 10 pushed New Zealand's Jo Aleh/Olivia Powrie back down the standings to go into the medal race in fourth overall, just 1 point behind the British team of Hannah Mills/Saskia Clark.

Better late than never seemed to be the motto for the Mills/Saskia (GBR) partnership who raced for their lives today in what they termed a “Brit-Off”, as they secured the race 10 win after a fiercely contested head to head with Penny Clark/Katrina Hughes (GBR) and Martine Grael/Isabel Swan (BRA), to move themselves up into third overall and medal contention with a shot at all three colours.

“It is very exciting,” said Mills. “We kind of had low expectations coming into this event due to lack of practice, not quite where you want to be coming into a World Championships. But we are really, really happy to be where we are. It is no fun being in the Medal Race if you haven’t got a chance at the medals, so to have done that we are really happy.” And on the head to head in race 10 with Clark/Hughes, Mills added, “It was a bit of a Brit-off. It was good fun, they have the edge upwind and we have the edge downwind so it was neck and neck, and we just got it on the last downwind.”

With their third place finish in race 9 marking a series best result for the new pairing of Rechichi/Stowell, they shifted up from 13th to find themselves just adrift from the top 10. An all or nothing showing in race 10 and a fifth place placed them safely through, helped by a home crowd cheering round the track.

The Australians certainly weren’t expecting this outcome after the first two days of racing when they were 23rd overall on the leader board. A delighted Rechichi said, “We are just so happy to make the top 10. This has been an amazing event and Belinda was part of the process five years ago in getting the event to Perth. It would have been disappointing to watch from the sidelines on our home turf, and so we really have nothing to lose tomorrow. We look forward to a crowd joining us – can’t wait.”

For the reigning World Champions, Westerhof/Berkhout, who lost their title defence earlier in the week, they have at least made it into the Medal Race and whilst impossible to move anywhere near medal contention, there is the chance for a best move up the leaderboard to end the Championships in sixth overall. Westerhof commented, “Yes it is good to be in the Medal Race, but even today we weren’t sailing that great. We know we can do much better than this, but it does feel good to comeback from such a disaster day like yesterday. We both kept our heads eye and we stick together, which is the most important thing after such a disappointment.” Westerhof went on to say that their game plan for tomorrow is to have fun.

A continuation of form for Martine Grael/Isabel Swan (BRA) saw them deliver a 12,3 scoreline and position themselves safely in the Medal Race contenders in 8th overall. They almost had another race win in the bag in race 10, but lost their lead when they struggled to find their rhythm in the downwind legs. They have the possibility to end the Championship in 5th overall, but that would take a race win tomorrow and a few other teams to finish behind them. Anticipating the Medal Race Swan said their game plan is, “to keep on working as we have over the last two days.”

The race 9 and 10 results further down the fleet were all about positioning within the top fourteen nations, with those in 11-14th place most at risk and where everything could change, which ultimately was the outcome for Denmark. Henriette Koch/Lene Sommer (DEN) had positioned themselves within the top 14 after race 9 but were out after race 10, as they swapped nation ranking with Germany. This was a really surprising outcome from Henriette Koch/Lene Sommer (DEN) who earlier this year claimed silver at the 2011 470 European Championships. Speaking on the reason for their poor form, Koch felt it was primarily in their heads.

Equally massive disappointment for the young team of Tina Lutz/Susann Beucke who sailed an impressive final race 10 to cross the line in ninth and with a 20th overall finish on the leaderboard secure Germany’s qualification to the Olympics as the fourteenth nation. But for the former Optimist World Champion Lutz and her crew, the 2012 Olympics will not be theirs for the taking as teammates Kathrin Kadelbach/Friederike Belcher, who finished 28th overall here in Perth, have met the German selection criteria and will be making their way to Weymouth.

Slovenia’s Tina Mrak and Teja Cerne had their best day’s sailing today to climb from the 17th ranked nation, and outside the top 14 qualification places at the end of yesterday’s racing, to the 13th ranked nation and secure qualification today. The team found out the news as soon as they reached the shore and were delighted, Mrak said, “We sailed two great races today. We improved on every lap and we are very happy.”

“After yesterday we were angry,” added Cerne, “and we didn’t believe we could do it so it is a really great feeling at the end of the championship.”

Joy for one team, disappointment for another. Yesterday, the world #1 ranked 470 team and 2010/11 ISAF Sailing World Cup winners Erin Maxwell/Isabelle Kinsolving (USA) had done enough to secure selection as the US representatives to the Olympic Games – but today that all changed and less than 3 hours of racing later they were out and their teammates Amanda Clark/Sarah Lihan were in. They will now both hang up their sailing boots to focus on their careers.

Twenty eight nations were represented in the 470 women’s event at the Perth 2011 ISAF Sailing World Championships, with only 50% able to qualify to the 14 nation places available to the 2012 Olympics from this Championship. The next and final opportunity for nations to qualify will be the 2012 470 World Championships in Barcelona, Spain from 10-19 May where the remaining 5 nation places will be awarded. With the automatic slot to the host nation, the 2012 Olympic Games will host a total of twenty nations in the 470 Women event.