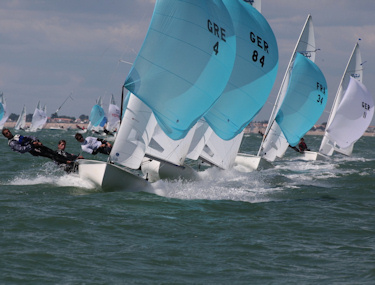 Lovely breeze in La Rochelle again for day 2 of the 470 Junior European Championships, but there were more scowls than smiles among the girls today.

With a total of 86 boats in the fleet, the battle in qualifying is to make it into the top 43, ensuring a place in the Gold Fleet finals. Currently only one girls’ team is comfortably making the cut, Annika Bochmann and Anika Lorenz in 27th overall. The German team who won this event two years ago were all smiles today, scoring 11,8 in the Blue Group. “We learned our lessons from yesterday, and set up our boat better today,” said Lorenz.

Behind them is a gaggle of girls’ teams hovering on the cusp of qualifying: Lisa Panuschka/ Esther Schwich (GER) in 40th; Frances Peters/ Eilidh McIntyre (GBR) in 41st; Rosita Bakker/ Jeske Kisters (NED) in 44th; and Victoria Jurczok/ Josephine Bach (GER) in 46th.

With two more qualifying races due on Monday 16 August, any of these teams can still guarantee their passage through to the Gold Fleet provided they post some solid scores in the top 20. It would be a huge disappointment for the defending champions Jurczok and Bach not to make it through to the top division. The Germans were lying in 4th place in today’s lighter first race, but dropped to 8th during the latter stages. That may not sound like a disaster but as Jurczok pointed out: “It is like finishing 16th instead of 8th, because of the two groups. We should have done better. Those were our winds but we were sailing with the mast too raked so the boat was underpowered.” 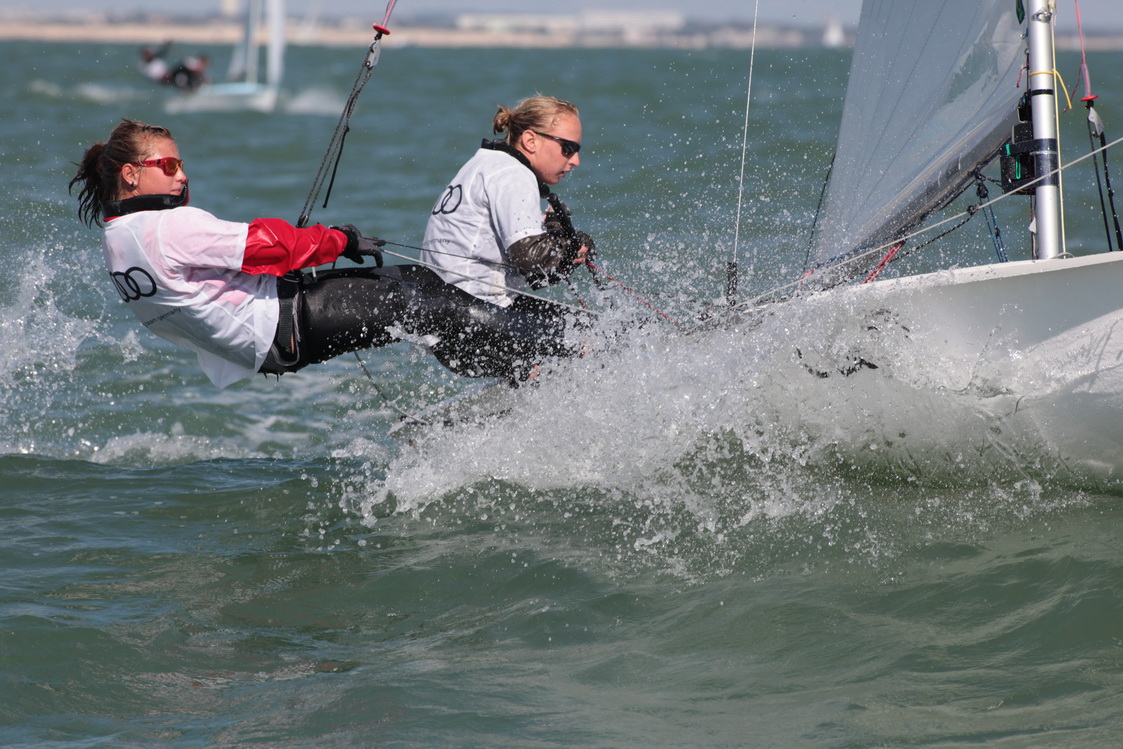 Jurczok’s next race was a 22nd. “A bad day,” she said, shaking her head. “We missed the start and in this fleet if you don’t make a good start, you are in trouble. I don’t think we can make it to Gold Fleet.” That may be pessimistic, but she certainly needs to step up a gear.

The other defending champions, on the other hand, the boys’ team of Sofian Bouvet and Jérémie Mion are proving unstoppable. They won both heats to add to the two wins from yesterday. Four bullets for the French. “It couldn’t be going better for us. We made better starts than yesterday, which made it much easier for us,” said Mion. They rounded the first mark of the first race in the top six, moving through to take the lead. In the second, they led at the first mark and extended their lead to the length of a whole reach. Dominant indeed.

Bouvet and Mion were good last year, taking the World and European titles, but this year they’re even better. Competing in their final junior championship, Mion attributes their performance to a season battling with the big boys at Olympic level, where they have also acquitted themselves very well.

That said, with the discard coming in today, there are some other teams breathing closely down the leaders’ necks. Training partners Berenger Balzeau and Mathieu Fountaine are just 1 point back, with Greek team Fanis Kavas and John Orfanos just another point behind in 3rd overall. Along with strong French and Greek performances, the German squad are also showing the potential for taking the overall title, although on current form the safest bet for the title would certainly be Bouvet and Mion.