It might seem a strange partnership, toothbrushes and the Olympic 470 dinghy, but the humble toothbrush plays an important role in the boat’s spinnaker set up and handling. 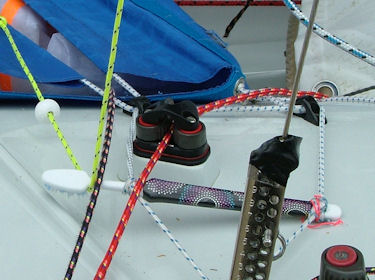 We decided to find out more as to why some teams are ardent supporters of the toothbrush, whilst other teams are 100% against the approach, preferring to use the more refined sail batten to achieve the same outcome.

2008 Olympic bronze medallist Isabel Swan (BRA) was the perfect place to start our research. With helm Martin Grael, they are ranked #11 in the world and are on a campaign to be selected to represent Brazil at the 2012 Olympic Games.

The Brazilian team has shockcord tied around either end of the toothbrush, whilst other teams have holes drilled through their toothbrushes, and Isabel explained the difference. “The tied approach works for us. When sailing, you just have to very quickly find where the toothbrush is, so you can get the spinnaker halyard. It is better than using a batten I think, even though this is a different way than people normally use toothbrushes.”

Helm Martine chipped in “You really have to be careful with the toothbrush you buy as it can break. If it has rubber in the middle it breaks.” So whilst the toothbrush companies promote the use of rubber for added teeth cleaning grip, 470 sailors prefer a totally plastic model to optimise durability.

The Brazilians have the most colourful toothbrushes for a specific reason, as Isabel continued, “It is good to be fashionable in the boat and also we like everything to be nice and matching. These are very nice toothbrushes.”

And the final word was from the Brazilian team coach, Andrew Brown (NZL), who said. “These are officially Reach toothbrushes. We went for different colours on each side so that Isabel doesn’t get confused as to which tack she is on!” Lots of laughter and a “No way,” response from Isabel.

Reflecting back to the 470 men’s teams, it seems that there is more popularity for the toothbrush in the women’s fleet, and Brown went on to explain, “Maybe you are seeing more toothbrushes, but girls are very fashionable – it is as simple as that!”

Moving onto the world #1 ranked team of Erin Maxwell/Isabelle Kinsolving-Farrar, who have gone a step further and cut down their toothbrushes for a more streamlined effect, Kinsolving-Farrar explained their thinking, “We had initially thought that the short stubby ones would be better because you wouldn’t have the long tail that got caught on things. But it actually turns out that the short ones are worse, so long ones are better.”

And on the rubber grip, “Rubber is generally bad as there is less white which weakens the integrity of the white plastic. Less rubber, more white, not the clear plastic.” And on brand preference, “We personally like Reach brand from the US because there is not too much of the rubber grip and the angle of the head is quite narrow!”

Isabelle went on to give her view on the reasons for the increased popularity of the toothbrush within the women’s 470 fleet compared to the men’s, “I haven’t polled the fleet, but I find that generally women have smaller egos and so they are more likely to go for easy practical solutions, which may not look quite as technical as using a batten.”

And on brand performance, Isabelle had one answer, “We prefer Reach from the USA.” And on a potential toothbrush sponsor, she concluded with a grin, “Reach - all the way!”

Next stop, New Zealand’s Jo Aleh who rumour has it is not a follower of the toothbrush. With one Olympic campaign under her belt in the Laser Radial event at the 2008 Olympics, Jo has now been in the 470 for a few years. Joe is a former mechanical engineering student, which may have some influence on her thinking.

“I think they look terrible. I don’t think it looks good at all. Our battens work and they look a lot better – for me it is all about the aesthetics.”

And on the colourful impact of toothbrushes and the fashion statement made by some teams, Aleh could only say, “You don’t need to brush your teeth between races. We are going for the minimalistic look – clearly we are boring.”

Jo could not be swayed, saying, “I think the batten is good, they are lightweight and we are not going to try toothbrushes.”

Joe’s lack of appreciation of toothbrush beauty caused some comment from coach Nathan Handley, himself an Olympian. “I think we need to broaden our horizon a bit more and look at what the other countries are doing. There is probably a reason why they are doing it. But we are caught up in our own little world and we are miles from anyone else.” And on the approach he would take to convince his sailors to use the toothbrush, Nathan added, “When they pack up one night, I would go down to the boat and just put it on.”

And on the colour scheme for the Kiwi team, Nathan felt a black and white toothbrush with a silver fern would be just right.

The last input on the toothbrush was from the 470 Event Measurer, Jurgen Cluytmans from Belgium, who is responsible to make sure that the 470 dinghies and equipment comply with the 470 Class Rules.

“Well for the spinnaker catches we define a length of maximum 150mm to the gunnel, but the type of device is not defined, so they can actually choose whether they prefer a flat batten with an elastic or use a toothbrush.”

It certainly tells a story of the innovation of sailors that they can use a tool as practical as a toothbrush for a successful technical application in a boat. Jurgen concluded, “This is the good thing about our sport. We try to keep it as one-design as possible, but we still have opportunities to use our own skills and technical experiences to see what works better or not. I think it is interesting to see what teams are doing.”