Anticipation was high in the boat park today as the top ten 470 Men teams prepared for the concluding Medal Race and the battle for podium places between four teams from four nations. 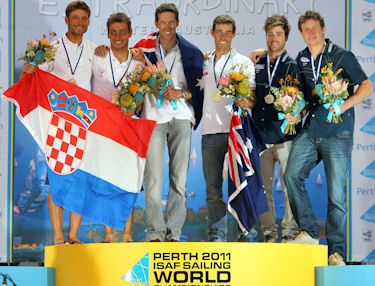 Defending World Champions Mat Belcher/Malcolm Page (AUS) went into the Medal Race with a very safe margin of 18 points over the next placed team. The only extreme which could rock their boat off the gold medal was if they finished last and the British pair of Luke Patience/Stuart Bithell finished first.

Belcher/Page know their game very, very well and sailed a cautious race. They didn’t have to win and played safe, as Page explained, “Halfway up the first leg we were back in the fleet. We had quite a conservative start to ensure we were not over the line. Every incident we came to we erred on the side of caution as doing a foul would have been a silly thing to do. We did find ourselves back in the pack a bit, but we kept the talk positive and kept pushing ourselves.”

The Aussie dream team crossed the finish line in fourth place and with it retained their World Championship title. Their glory here in Perth marks a far bigger story, as Malcolm Page is the most successful 470 sailor ever and likely the most successful Australian sailor. Questioned on what it feels like to win his fifth 470 World Championship gold medal, Page said, “I have been very fortunate and sailing has been very good to me. I come from a non-sailing family and it is a special sport. You are out there dealing with Mother Nature and no two days are the same.”

Commenting on their mouth-dropping scoreline which includes six race wins, Page said, “Mat and I had a phenomenal week. It was something we could never have dreamt of or thought possible.”

Asked how he felt when crossing the finish line, Page said, “There was a lot of elation. I hadn’t really thought about it until crossing the line this afternoon and I did give a bit of a whoa after crossing and gave Mat a big hug. I am sure I will celebrate a little more tonight. It is a special thing to represent your country.”

Page concluded with a tribute to coach Victor Kovalenko, “There is no more special person than Victor. He is a great person, friend and mentor. I have two mentors in my life, one is my father and the other is Victor.”

Patience/Bithell were the only team who could challenge the Aussie for the gold and gave the Medal Race their everything. Overnight protest decisions had upset the leader board and opened the door for the British to lose their previously guaranteed medal place, so they had everything to lose if the teams from Croatia and Israel could close the points gap.

Patience/Bithell left nothing to chance and charged off the start line into a clear track up the course to put the race in their hands with total control and win the race with a significant margin. Ashore and with the silver medal secure, Patience said, “Yeh it was a good race. We couldn’t have done much more. We went from a guaranteed medal last night to not guaranteed this morning, so it put a bit more pressure on things. But we like the pressure and rising to the occasion, so it was nice to go out there and smash it really. A nice big lead in a small race, we are pleased, really pleased.” 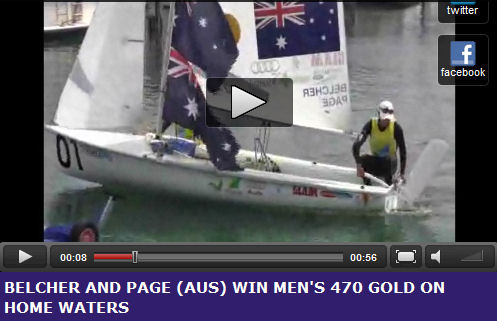 On the Australian performance, Patience said, “They are such great sailors and they have had a great week. One of the reasons they are such a good team is that they are so hard to beat.” Patience/Bithell are now no doubt hopeful to receive the telephone call from the British team selectors which will send them to the 2012 Olympic Games.

With Patience/Bithell leading and the Aussies playing it safe, the next battle was for the bronze medal between Croatia’s Sime Fantela/Igor Marenic and Israel’s Gideon Kliger/Eran Sela, with the Croatians going into the Medal Race with a 3 point advantage. Despite a solid start from Israel, they could not stop their plunge back through the fleet and 20 point score as the last team to cross the line, leaving them 7 points adrift of the bronze medal.

Croatia’s reigning 470 European Champions finished in eighth which was sufficient to deliver the bronze medal, their third successive medal at a 470 World Championships. A beaming Fantela commented, “It was a really tough week. We had many problems on the shore, the biggest problem was on the shore with the protests, but on the sea we showed we are top three. This is our third medal in three years at the Worlds and in the Europeans as well. We are really happy we are top three again.”

Marenic took over to relive the race, “It was three teams fighting for two medals and we had to take care of the British and Israelis. The British had a great start and took off in front, so it was just about us and the Israelis and we managed to finish before them in this really hard race and we are thrilled now.” There was no time for compassion for the tenth place finish from Israel, “It is part of the game. For us it was good that they were behind, but for them of course not. We had a very similar situation at the Europeans this year, where we fought with them again in the Medal Race for two points. The medal race is tough and everyone knows it, as there is a lot at stake. What can I say, you sail all week with 40 boats and then you depend on a Medal Race of ten boats, close to the shore, big waves, spectators, double points and everything so the pressure is on. Everyone can feel it, you can cut it with a knife, but it is good and we enjoyed it.”

And on the enormity of securing the bronze medal, Fantela concluded, “It means a lot, especially for our small country and our support towards London Games. For us it is all about results and this is huge.”

The 2011 470 World Championships for the 470 men attracted 80 teams from 39 nations and five continents. Alongside the three medal winning teams, 19 nations from four continents qualified to a place at the 2012 Olympic Sailing Competition. The final opportunity for nations to qualify for the Olympics will be at the 2012 470 World Championships in Barcelona, Spain from 10-19 May 2012 where seven places will be available.

The 470 Women’s Championship gets underway on Monday 12 December, with racing re-scheduled to now start at 1430 hours on Owen Course area.