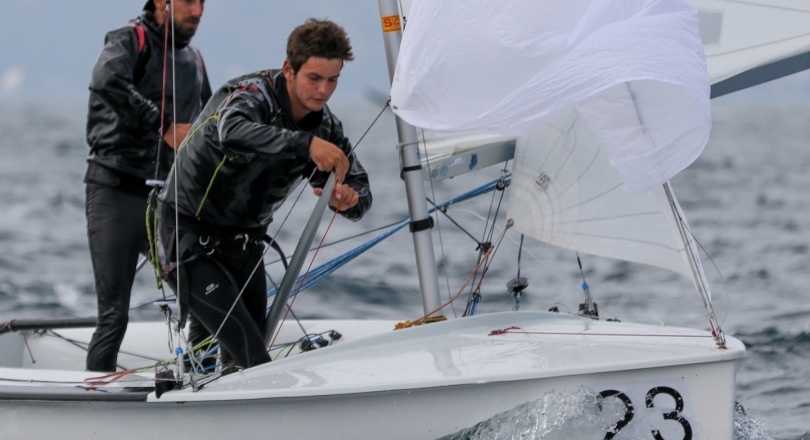 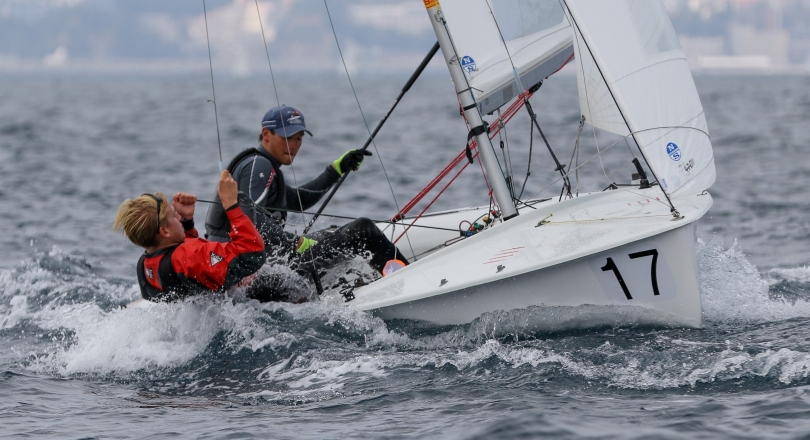 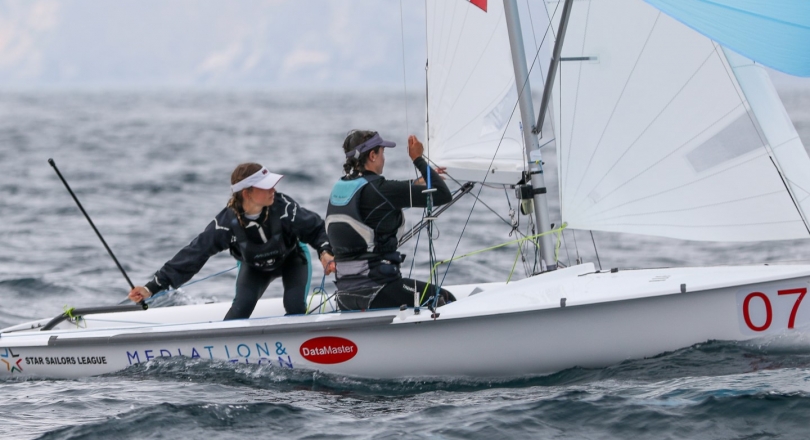 A repeat of Monday morning's weather as the fog blocked the view on Tuesday morning, before giving way to another perfect blue sky day and racing underway just after 1400 hours for the 470s, and almost two hours later for the 420s.

The unpredictable onslaught of conditions out on the two course areas today saw some favourites unseated from their usual dominance at the front of the fleet. The up and down breeze took a while to stabilize, and continued to be variable throughout racing, from virtually nothing up to around 8-10 knots.

With two more races to go in the 420 Open and 420 U17 fleets, the frontrunners are looking safe based on form so far, but anything can still unfold.

Wednesday’s final day features two races for each of the 420 Open and U17 fleets, with a scheduled start at 1300 hours. The top ten in the 470 Men and Women advance to the medal race, with the men racing at 1400 hours, and women at 1445 hours. Before that, the rest of the respective fleets will contest a final race, starting at 1300 hours for the men, followed by the women.

420 OPEN
Bit of a struggle on the 420 course, which experienced a totally different weather system compared to the 470 fleet race track. Postponements on the water only emphasized nerves and expectation as teams patiently waited for racing to get underway in the light breeze.

Not a good outing for overnight leaders Enzo Balanger/Gaultier Tallieu Gueydan (FRA), who shocked their scorecard by placing 24, 16 making it their worst tally of the series. As a consequence, they traded places with Spain’s Martín Wizner/Pedro Ameneiro who finished 5,1, and count an impressive series of all top 5 finishes, including four wins. Third to Pablo Ruiz Miguel Martínez-Fortún (ESP).

“We are feeling good, very good,” smiled Wizner after racing. “The objective we had in this regatta was to not have any bad results. We are always in the top ten, so we have got to the last day without any bad races and we are very happy with that. We will see tomorrow how it goes."

Speaking on their strategy to stay calm on a day of postponements and wind waiting, he continued, “We like to have fun with our coach and stick with the others teams and not get stressed with the racing. We eat and drink and just stay concentrated.”

Two races to go on Wednesday to decide the podium and whilst the leaderboard is in theory still wide open, in practice we can predict a battle for gold between the top two teams.

A significant nine place leap up the leaderboard from Clara Olive/Solenza Mariani (FRA) consolidates not only their position in the 420 Open fleet, but most likely seals their grasp on the 420 Women’s title too. The pair trumped the 49 boat gold fleet with a win in race 9, and backed up with a 4th in race 10.

“Today was light wind, our favourite conditions, and we felt very good and our speed was good,” said Olive. “Our speed meant we could do what we wanted to do, compared to the days before. We feel really happy to win this race.”

420 U17
Australia holds onto the top two places in U17, with Cole Tapper/Tyler Creevy and Ryan Littlechild/Jack Ferguson out front. Poland’s Jakub Gołębiowski/Filip Szmit have bounced back from yesterday’s equipment failure and move into third overall from scores of 1,7, ousting the USA’s Oliver Hurwitz/Ethan Froelich to 4th.

Tapper/Creevy scored their first win of the Championship in race 10, but this team is not about the race wins, but a steady approach to come out on top. There is a 60 point spread between the top ten teams, and with 44 boats racing in the U17 fleet there is still plenty of opportunity to unseat teams and seize a leader board breakthrough.

Israel’s Maor Abu/Yoav Rooz have struggled the past few races in the unpredictable breeze and pressure pockets dotted around the course. They launched today’s final assault on the medal race with another disappointing 11th place, after choosing the wrong side of the course in the first upwind. They emerged victorious though, as a win in the next race though put them in an unassailable position for Wednesday’s medal race. A best ever result for the pair, although they still have to start and finish the medal race cleanly to guarantee the gold around their necks. They have both come to the 470 Class via the 420 and the Optimist, and interestingly Abu secured Israel’s best ever result in the Optimist Class, a 2nd at the 2012 Optimist Europeans.

“I am so happy,” grinned an ecstatic Abu. “I don’t have any words. It is so exciting and a very good feeling to finish with the gold medal before the medal race. Only the best guys, like the Australians, do it. Now we know we can do even better.”

“It is so hard to compete. For me the most hard thing is the nights,” explained Abu on the challenges of a top level Championship. “From the first day I didn’t sleep every night, as I was always thinking what I would do the next day and I just couldn’t sleep. But it is good, because then you know everything is OK, because you have already imagined all the things that you are going to do in the race.”

Hungary’s Balázs Gyapjas/Zsombor Gyapjas managed to overhaul Nitai Hasson/Tal Harari (ISR) by 3 points, and the battle for silver and bronze will unravel between these two, as none of the other teams are in contention as the points differential is too great.

Best ever Championship outcome with a silver or bronze for the Hungarian brothers, as a jubilant Zsombor said, “We are very happy of course. We have had a hard Championship. In the beginning the wind was not what we prefer, but at the end came the lighter breeze so we managed to be in 2nd before the medal race.

“We chose the wrong side of the race course in the first upwind, so we lost a lot of metres and managed to come back,” he explained about their 13th place, which could have been far worse. “We lost some points then. But in the next race we tried to attack and managed well.”

“We haven’t spoken about our plan for the medal race yet,” said Hasson when asked about his strategy to hunt down the Hungarians and upgrade bronze for silver in the medal race.

“But we have two plans. One will be just to win the race and hope that one boat will be between us and the Hungarians, and the second will be to match race them and we know how to do it well. So we will see and I think we will decide how to do it in the morning what we are going to do. But both options will be interesting for tomorrow.”

470 WOMEN
After the first race 10 of the day, Theres Dahnke/Birte Winkel (GER) had amassed a 21 point advantage. Hold onto that and they had the gold medal sewn up, but they lost their pace in race 11, finishing 7th and instead advance to the medal race battle assured of gold or silver – not a bad day in the office!

Winkel explained the conditions, saying, “For sure it was really shifty conditions, and sometimes the wind drops completely on the upwind mark, so it was really difficult which side to go. We were really open for everything that would come and we had not big plan, just had our minds open. We just limited risk on the start and just race for a good result and consistent series.”

The pair’s previous best result was 6th place at the 2016 420 Junior Worlds, so they can now celebrate a career best in their pockets.

Luise Wanser/Helena Wanser (GER) go into the medal race in second and Marina Lefort/Lara Granier (FRA) in third. Behind these two, in theory any of the teams down to the Polish in 7th have a podium punt.

The Polish team, Antonina Marciniak/Hanna Dzik, are facing their first ever medal race together and have an outside chance at bronze if they win the medal race and the teams ahead of them finish at the back of the fleet.

“I think this could be our advantage, as we don’t actually know what could happen,” anticipated Marciniak. “We will try to do our best to win it of course!”

Two new faces found their feet to control the fleet, with Francesca Russo Cirillo/Alice Linussi (ITA) winning the first race, and Charlotte Yven/Julia Colombe (FRA) the second. But their strike was a bit too late, as both missed the medal race cut.