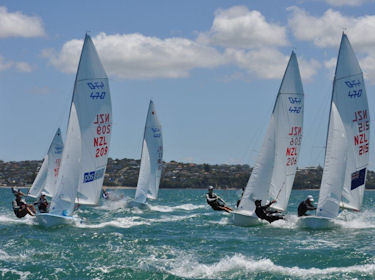 The 470 Training Clinic taking place from 24-26 January 2012 , immediately prior to the 2012 470 Junior World Championships has attracted junior teams as well as senior teams. Led by world class coach Nick Drougas (GRE), the clinic initially had 11 registered applicants, but on the first day word had spread and 19 teams were ready and waiting.

Tuesday’s opening day saw a gusty and shifty offshore wind of 12-17 knots to put the teams through their paces. Focus was on boat handling around marks and sail trims for the next legs, along with tactics and sailing the boat at maximum speed, start practice and upwind tactics.

Some great performances were noted by coach Drougas, who commented, “I can see some amazing progress by teams compared to 2011, particularly Matthew and Robert Crawford (AUS), and Annika Bochmann (GER) who is racing with a new crew.”

Day 2 of training was held with an increased breeze of 13-18 knots, with the training split into three elements:

- boat handling around the marks;
- upwind tactics and position defence on upwind/downwind;
- races for the junior fleet joined by some of the senior NZL sailors.