A stunner of a day for the finals of the 2010 470 Junior World Championships in Doha, Qatar. 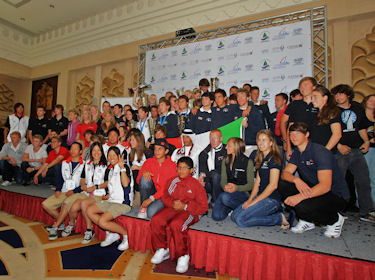 Racing the first Medal Race today were the women's fleet, with the medals at the hands of several teams from the six nations qualifying to the Medal Race – Japan, Germany,Poland, Netherlands, Ukraine and Malaysia. 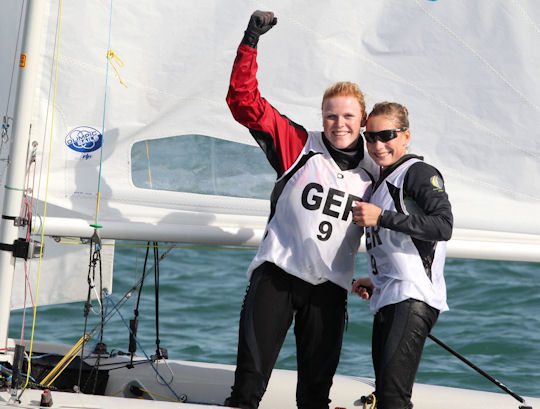 The top two boats, Japan's Saki Goto/Hiromi Nishiyama in first overall and Germany's Victoria Jurczok/Josephine Bach were on equal points – but still had plenty of work to do to put themselves on the podium.

Annika Bochmann and Anika Lorenz (GER) were third overall in the standings going into the Medal Race and had every chance of a medal, but their second place finish in the Medal Race was not sufficient. Jurczok/Bach sailed a relatively safe race to finish fourth and secure the gold. They relished the stronger conditions, as did the other German team in with a chance for the podium slots Bochmann/Lorenz. It was not the kind of day the Japanese wanted though just a bit too much wind for them to compete against the heavier teams – but they held steady to finish mid fleet and take the bronze. 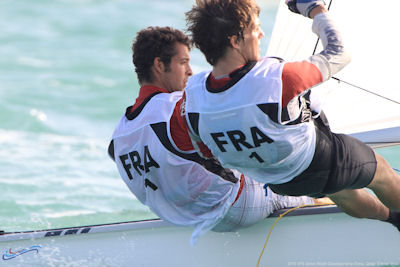 Second up on the race track were the Men's fleet, with 10 teams from seven different nations – France, Austria, Italy, Germany, Japan, Netherlands and Greece – in the Medal Race. The teams of David Bargehr/Lukas Mahr of Austria and Sofian Bouvet/Jeremie Mion from France knew going into the medal race that they were certain to leave Qatar with medals around their necks – they just did not know whether the colours would be gold or silver. A second place to Bouvet/Mion was more than enough to give them the gold, whilst the Austrians who finished sixth in the Medal Race took the silver.

The fight was then on for the bronze between several nations. France's Sacha Pelisson/Nicolas Rossi won the Medal Race, and will be disapponted that despite finishing eighth it was the Italians of Simon Svitz Kosuta/Jas Farnetti who had enough of a points advantage over them to claim the silver.

About the 2010 470 Junior World Championships:
The 2010 470 Junior World Championships is a “pay and play” event with brand new supplied 470s. The concept of supplied equipment is a first time experience for many of the teams, and one which the 470 Class is keen to promote. With supplied equipment, all teams compete on an equal footing with only minor adjustments allowed to settings as the boats are rotated between the two fleets.