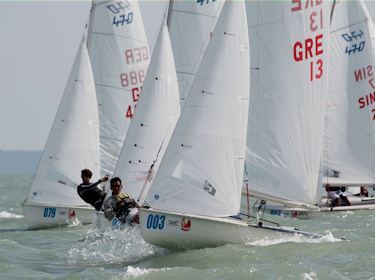 Among some of the world’s best young sailors from 20 different nations getting ready to compete at the 470 Class Junior European Championships which starts this weekend in La Rochelle, France are the teams from France and Germany who are getting ready to defend title.

Although the event is limited to sailors aged 21 or under, many of last year’s top-performing teams from the 2009 Junior Europeans will be back to fight for the 2010 title. They will all be a year older and wiser, and so the competition is set to be even tougher than last year’s regatta on Lake Balaton, Hungary.

Reigning Junior World and European title holders, the French team of Sofian Bouvet and Jérémie Mion, are strong favourites to hold on to the title. Not only are they defending the championship on French waters, but they have had a very successful year competing in the 470 at senior level. Against some of the greatest Olympic sailors these young competitors have scored top 10 finishes in each of the World Cup events in which they have competed, with the exception of Skandia Sail for Gold 2009 in Weymouth. Their ISAF world ranking has moved from 27th last summer to 15th a year later.

So anyone with serious intent on winning the Junior European title will have to put in a world class performance to take the trophy away from Bouvet and Mion. One sailor that’s difficult to intimidate, however, is Julian Autenrieth from Germany. A former Optimist World Champion, Autenrieth is now racing the 470 with his older brother Philipp. “We’re here to get some more international experience after changing to 470s last year,” he said, adding that he was looking forward to getting stuck into some racing after waiting for his brother to compete his final exams at school.

While the Autenrieths are one of the underdogs looking to upset the form book, fellow Germans Victoria Jurczok and Josephine Bach are looking to cement their status as the leading ladies in under-21 470 racing. They ended up dominating a tricky, light-airs event in Lake Balaton last year but know how difficult it will be to defend their title. “We are quite happy to be racing again at the 470 Junior Europeans,” said Bach. “This regatta is very important for us, because we have to affirm our performance from last year to get to a higher level in the German sailing system, so we are looking to finish in the top three girls’ teams.”

One of their chief rivals will be the 2008 Junior European Championships also from Germany, Annika Bochmann and Anika Lorenz, who took bronze last year, just a point behind Maria Voulgaraki and Danai Paschou of Greece. All the medallists from 2009 are going to be in the hunt again, but there are some lesser known quantities to consider such as newcomers to 470 junior racing, Great Britain’s Frances Peters and Eilidh McIntyre. Peters proved her world class status winning the 2008 ISAF Youth Worlds and has since started competing at senior level in the 470. She will be keen to show that what she could achieve in the 420 she can do equally successfully in the 470.

Numbers for the 470 Junior European Championship are down a little from last year due to the Skandia Sail for Gold Regatta. Initially planned as an a restricted entry event, last year Sail for Gold was changed to an open entry event as per the other events on the ISAF Sailing World Cup series. However, the fact that leading competitors in the junior 470 fleet have chosen to come to La Rochelle shows how seriously the sailors take this regatta, and there are 84 competing teams ready to race. Some competitors have been taking advantage of a pre-Championship racing clinic being run by the 470 Class from 9 to 12 August, to help get sailors up to speed before the main event.