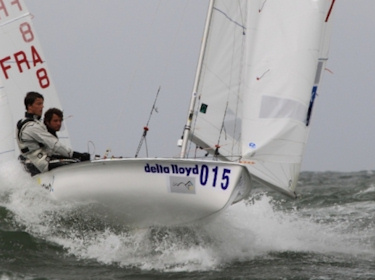 Ninety-two teams from 25 nations are converging on Istanbul, Turkey, in preparation for the 2010 Open 470 European Championships which begin next week. Some 470 sailors have driven many hundreds of kilometres across Europe on the long road to Istanbul, the ancient city situated on the Bosphorus Strait, the narrow stretch of water where Europe and Asia meet.

Some sailors have arrived early, not just to train on the water, but to explore this huge and intriguing city, which in 2010 is also designated as the European City of Culture. However, from next Tuesday, culture is cast aside as the sailors focus on the competition and a chance to win a Championship medal in one of the strongest Olympic classes.

In the Men’s/Mixed division, defending Europeans Champions from Croatia, Sime Fantela and Igor Marenic are hotly tipped by many of their rivals as a good bet for gold in Istanbul. This team has been one of the most consistent of the past few years, winning both the Worlds and Europeans in 2009 and taking the bronze medal at the 2010 Worlds a few weeks ago in The Hague.

The Hague was a very windy and wavy regatta on the North Sea, and for some it was a war of attrition, with a number of the big names succumbing to gear failure. Istanbul offers a final shot at redemption in 2010 for those who stumbled at The Hague.

Pierre Leboucher and Vincent Garos had a terrible Worlds but bounced back to win gold at Skandia Sail for Gold Regatta in Weymouth just over a week ago. “Istanbul is our last big regatta of the season,” said Leboucher, “and although we know the competition is going to be tough, we are certainly going there with the hope and intention of winning.” Some of Leboucher’s biggest competition will come from his fellow French sailors, notably Nicolas Charbonnier and Baptiste Meyer Dieu who won silver at the Worlds, and up and coming young crew Sofian Bouvet and Jérémie Mion who dominated the 470 Junior European Championship in La Rochelle last week and, with an ISAF World Ranking of 15, are not doing too badly at senior level either.

Mion is ambitious but realistic about his chances at senior level. “We were disappointed with our World Championship performance,” said the Antibes sailor who came 24th in The Hague. “We have not had that much practice in the really big winds and we paid the price. But if we get the same kind of conditions that we experienced earlier in the year when we trained in Istanbul - 15 to 25 knots - then we will hope to do well in those conditions.”

British sailor Luke Patience is capable of winning a medal, as he has just proven with his bronze in Weymouth two weeks ago, not to mention a silver at last year’s World Championship. However he and crew Stuart Bithell are focused on getting things right for a regatta in Perth at the end of the year. “We are not putting ourselves under pressure to win a medal in Istanbul,” said Patience, “but it’s a great opportunity to get into some racing with some of the best boats in the world.”

In the 35-boat women’s division, reigning European Champions Giulia Conti and Giovanna Micol will be hard to stop, always being keen to make their mark whenever possible. Chief among their competitors will be the French team Ingrid Petitjean and Nadège Douroux. Denmark’s Henriette Koch, like some of the men mentioned earlier, is looking to Istanbul to make amends for a World Championship that didn’t work out as planned. “We had some bad luck in Holland,” she said. “For us this is one of the most important regattas of the year and we are keen on making sure that as much as possible goes our way in Istanbul.”

Racing starts with the qualification series on 31 August and the regatta concludes with the Medal Race on 6 September. The 2010 Open 470 European Championships is organised by The Istanbul Sailing Club in co-operation with the International 470 Class Association and the Turkish Sailing Federation.