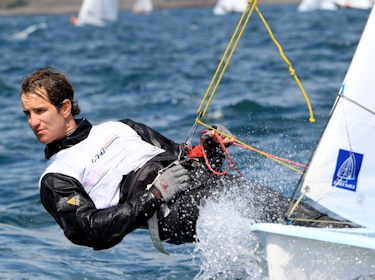 The International 470 and 420 Class Associations are giving you the chance to learn more about the 470 and 420 and improve your sailing with a Clinic in Buenos Aires, Argentina from 25-27 October 2010. Taking place on the non-racing days of La Semana de Buenos Aires, the clinic will be held at the Yacht Club Argentino. The 470 Clinic is being combined with a 420 Clinic, although both classes will have their own specific coaches.

Who can Participate
Anyone from a South-American country, or any 470 and 420 sailors who will be in South America.

The Goal
To improve your skill in the 470 with coaching and expert knowledge from Juan de la Fuente (ARG) and Lucas Calabrese (ARG).

The Coaches
Juan de la Fuente is a world class sailor, with three Olympic appearances to his credit including a bronze medal at the 2000 Olympics. Lucas Calabrese is the helm of Juan and has been competing internationally for over 5 years. National coach Agustin Zucati will work alongside Juan and Lucas.

What Will You Get?
The International 470 and 420 Class Associations will offer a 3-day 470 & 420 Clinic organized by Fernanda Sesto, including coaching, lunch and technical material. The Clinic will take place on 25, 26 and 27 October at the Yacht Club Argentino, Buenos Aires, Argentina.

The daily programme will combine shore-based lessons with on the water exercises offering racing and will be followed up with an evening debrief, including reviewing tactical and strategy situations. Sailors will receive individual support both on the water and with post-training video analysis.

Application and Deadline
470 & 420 sailors should please complete the application form, together with a statement giving the reasons why you want to apply to take part in this Clinic and your future sailing plans and send it to the International 470 Class: solidarity@470.org by the deadline of 17 October 2010.