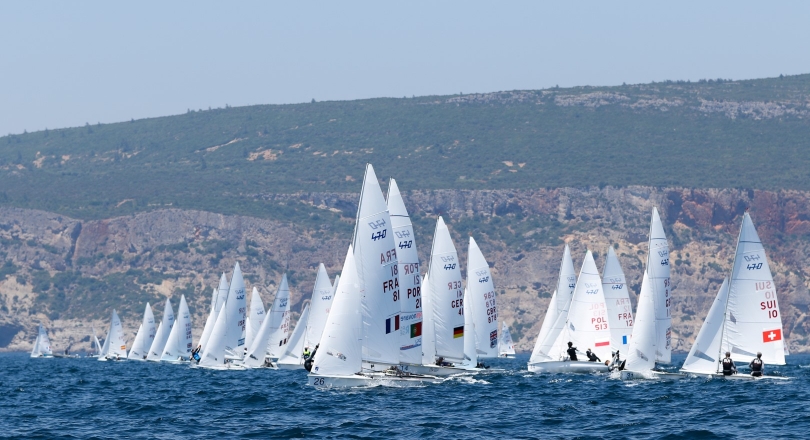 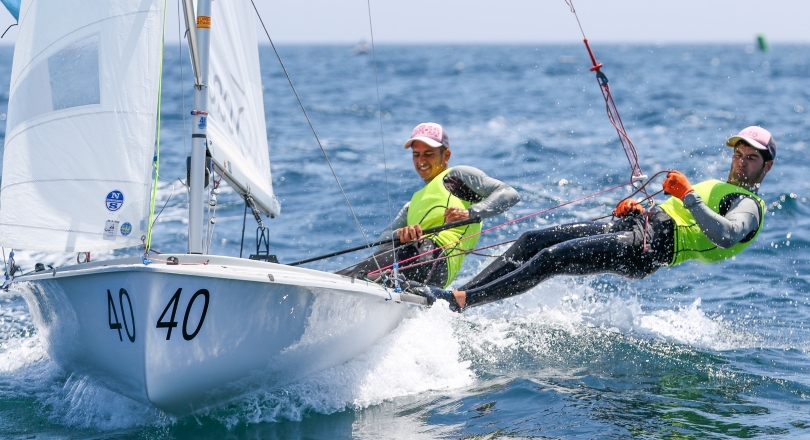 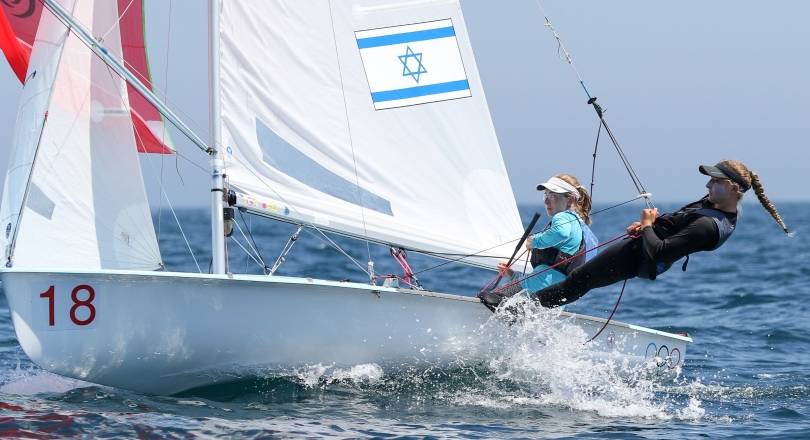 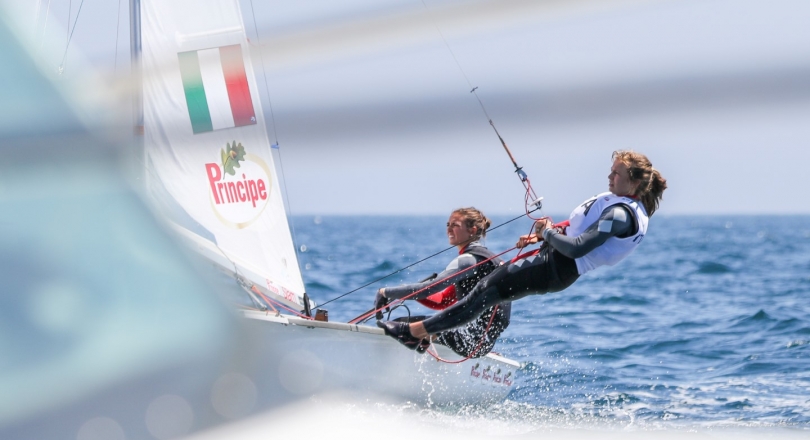 Race day 3 marked both the halfway stage of the 420/470 Junior European Championships in Sesimbra, Portugal and a change in race track conditions.

After a short postponement ashore, the Sesimbra beach packed with sunbathers literally waved teams off as they headed out to the race track in a light breeze. As forecast the seabreeze filled in, although later and lighter than previous days, making it a hunt to find pressure and shifts, before the breeze increased to around 17-18 knots.

Two races for all fleets, 420 Open, 420 U17, 470 Men and 470 Women, saw some consolidation out front and escalation in performance from others in a showcase of young talent. A crunch day for the 98 teams competing in the 420 Open fleet who were battling to make it into the top 49 teams who would advance to gold fleet racing.

Racing continues on Monday 9 July, with a scheduled start time at 1400 hours and 2 races for all fleets.

420 OPEN
With six races completed, the top placed 49 boats have secured their place in the gold fleet, with the rest racing in silver. Returning to top billing are Spain’s Martín Wizner Pérez-Lafuente/Pedro Ameneiro Amezaga from a 1,2 scorecard, on tiebreak with France’s Enzo Balanger/Gaultier Tallieu Gueydan, and Great Britain’s Niamh Harper/Ross Thompson in third.

The fleet is packed with talent and each nation’s best sailors and National Champions. Just amongst the top three, Spain counts gold at the 2017 U17 420 Worlds, the 2017 Youth Worlds silver medal to Balanger/Tallieu, and Harper/Thompson are reigning 420 National Champions. The British pair is also one of just six mixed teams competing.

“We can sail better than most of the boys anyway in the breeze!” said Thompson on their mixed partnership.

“There is a bit of pressure on us,” continued Thompson in reference to their National title, "but it is sort of a level playing field when you get here, because everyone is competing on an international stage, so it gives everyone a chance.”

The pair scored a 23, their discard in the opening race 5 of the day, before switching to a front of fleet performance as the breeze increased and they won race 6.

“We found starting quite difficult and the tide was pushing us back on a tight line. It was just difficult to get sailing and we just didn’t get a clear start, missed the first couple of shifts and just sailed backwards really," was Harper’s summary of their 26th place in a race all about pressure sailing and finding the shifts. “It was a catch up game from then on, but we couldn’t get it back to where we would like.”

Reigning Italian 420 National Champions Gabriele Romeo/Giulio Tamburini posted their best scorecard to date, winning race 5 with a 200 metre advantage and second in race 6, to move up to 5th overall.

“The main difficulty today was to remain in the wind, as it was very shifty and gusty,” said Romeo, “so that was the secret. I just managed to remain in the pressure and that was it. In the second race it got up to 20 knots and we had to have a lot of boat control.”

“We understood the conditions better today, and we know the race track better,” chipped in Tamburini.

420 U17
A total shuffle in leaderboard positions, as Jakub Gołębiowski/Filip Szmit (POL) shift up to take the lead after winning race 6. They sit on tiebreak with Jacobo García/Antoni Ripoll (ESP), and overnight leaders Cole Tapper/Tyler Creevy (AUS) drop to third.

A lighter race opener converted to 18-19 knots and waves for the second race of the day, which proved a challenge for some.

Greece’s Melina Pappa/Maria Tsamopoulou took out the first win and 8th in the next, to move up 3 leaderboard places to fifth overall and top placed women.

“We are really, really pleased with our first race especially and winning. In the second race it was really windy for us because we are a light crew, but we managed to make it to the top ten,” said Tsamopoulou. “In the first upwind we stayed with the fleet and we passed the first mark in 2nd place and then in the downwind we managed to get ahead.”

Competing in their last year in the U17 fleet, the pair’s target is a podium finish, and upgrade on their 7th overall and second women’s team in the U17 fleet at last year’s Junior Europeans. A disappointing first day, with scores of 42 and 20, made their goal a bit harder, as Tsamopoulou explained.

“We had a pretty bad first day with equipment issues which meant we had a problem with our speed, and everyone overtook us, but we overcame it.”

Behind the Greek pair, the USA’s Victoria Chisari/Sofia Segalla in 17th overall are the second placed women’s team, with Poland’s Zofia Korsak/Karolina Cendrowska in 18th.

470 WOMEN
Up front and holding on to the overall lead are Theres Dahnke/Birte Winkel who scored 1,6 and sit on a 4 point advantage over Luise Wanser/Helena Wanser. Third to France’s Paola Amar/Marine Riou.

Best race track performance went to Poland’s Antonina Marciniak/Hanna Dzik who scored 2,1 and shift up into the top 10.

“It was our favourite conditions today,” explained Marciniak. “The wind was lighter which was good for us as we are pretty small.”

Dzik, who won the Youth Sailing World Championships and silver at the Womens’ 420 Junior Europeans in 2016, added, “The wind went to the right side and there was a huge shift to the right side, and we had good speed and that was the most important thing today.

“It has been too much wind for us the previous days, and we are happy about today, but not the other days. This is our first Championship, and we have only been sailing together since February, so it is a short time and we are doing our best,” reflected Dzik.

Also leader board climbing, with the next best performance behind the Polish, were Israel’s new partnership of Yahel Wallach/Omer Bilia. As one of the smallest teams here, they enjoyed the lighter and unstable breeze, which gave them the opportunity to gain on tactics and not struggle for boat speed so much.

“We had our eyes out of the boat looking for the wind and the next shift,” explained Wallach. “Omer is very technical and feels the boat really well which is really helping.”

470 MEN
Yesterday’s run of three race wins came to an end today for series leaders Maor Abu/Yoav Rooz (ISR), as they took out a 6th place. They along with the other two top teams found themselves in unfamiliar territory, scoring their worst results of the series so far, as the shifty conditions unseated them.

They swiftly returned to form with a race win to end day 3 with a 9 point advantage over team mates Nitai Hasson/Tal Harari. Four points behind are Hungary’s Balázs Gyapjas/Zsombor Gyapjas in third, with a 25 point margin over the 4th placed team.

“All of us have competed in the World Cup events and Europeans this year, which is a higher level and given us more experience over the fleet,” commented Balázs Gyapjas on the performance advantage of the top three. “I guess we are a bit faster and we can solve the close situations a bit better. But, I am not super happy with our performance, as we are not fast enough in the upwind to compete with the top team, but for sure light wind days are coming so we will still have a chance to climb up a bit. We will see.”

With these three pacing each other in their own battle, Gyapjas acknowledged it will be hard to run down the points advantage held by Abu/Rooz.

“It will be hard as we are one step in front of the fleet, so it is hard to get back the points and the Israeli team are sailing really well.”

Racing continues on Monday 9 July, with a scheduled start time at 1400 hours and 2 races for all fleets.