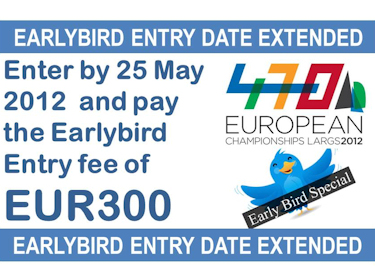 The International 470 Class is extending the reduced entry fee date for the European Championship in Largs, Scotland until 2359 hours UTC on Friday 25 May 2012. Boats that enter on or before this new cut-off date will pay only EUR300 per boat. After Friday 25 May the entry will pay the normal entry fee of EUR400 per boat.

The 470 European Championship 2012 will take place in Largs, Scotland from 25 June – 4 July 2012. Host venue, Largs Sailing Club in Ayrshire is one of Scotland's premier dinghy and keel boat racing clubs, and boasts a state of the art clubhouse, with immediate access to some of the best and most scenic racing water in Europe.

The 470 European Championship is a key fixture on the international calendar. Many teams will go straight from Scotland to represent their nations on the start line at the 2012 Olympic Sailing Competition, just over a month later.