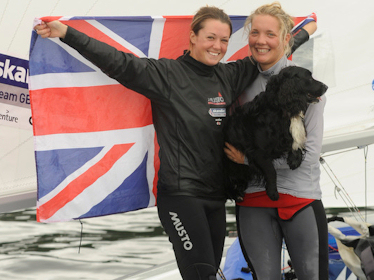 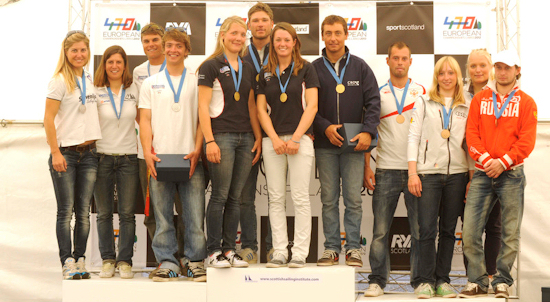 The top 10 teams on the leader board in the 470 Men and 470 Women fleets competed in the Medal Race double-points sail off, with the other teams racing a final race. All racing took place on course area B immediately opposite Largs Sailing Club in a windward/leeward format.

Light winds were the order of the day, in what was to prove testing for athletes and the Race Committee.

470 Men
With a night to sleep on their achievement of securing the 470 European Championship title for a second successive year, Sime Fantela was reflective today, “It is great. Yesterday was a bit strange to secure gold ahead of the Medal Race. We have never secured a medal ahead of the Championship finish at senior level. It was a different feeling than other wins.”

The Croatians had no pressure to deliver a top result in the Medal Race, but they always sail every race to win, so it was no different today.

There were two attempts from the Race Committee to get the 470 Men Medal Race completed, but the wind was just not going to play ball. In the first attempt, with the wind disappearing and the teams just about to round the downwind gate, the Race Committee signalled abandonment. Fantela/Marenic were leading.

A 180 degree change of wind direction and the second attempt to start the Medal Race also saw the lead in the hands of the Croatians during the second upwind, when again the race had to be abandoned.

In the dying wind the Race Committee had absolutely no option than to abandon racing, and comfort perhaps that at the point each of the races was abandoned, the positions of the teams in the race would not have changed the eventual outcome of medallists. 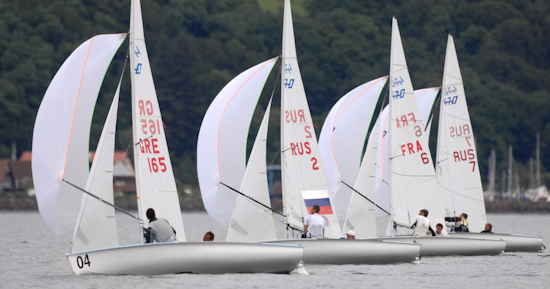 Commenting after racing, Fantela said, “Today was all about sailing and enjoying sailing without pressure. We didn’t have to worry about the result and taking care of our opponents. Today was all about tactics and strategy and watching the wind."

Looking forward to getting back home to celebrate, Marenic said, “Of course our friends and family will be at the airport and we will have light celebrations. It is before the Olympics that is why the celebrations will be light!”

And on the motivation their European Championship victory will give them ahead of the Olympics, Marenic continued, “This is a big confidence boost of course, but we will sail every race like it is the race. We will try our best and we have one month to get to know Weymouth a bit better.”

Sailing is becoming increasingly more high profile in Croatia as a result of Fantela/Marenic’s continued successes and the pair are this month featured in one of Croatia’s most popular magazines including a double-page photo spread. Fantela said, “Sailing is getting bigger in Croatia. In the Olympics in individual sports, sailing will have the most athletes. We want to promote our sport and sailing in Croatia and hope more kids, people, sponsors and the government get interested.”

At the start of the first Medal Race attempt, the eventual silver medallists, Ben Saxton/Richard Mason (GBR) looked as though they had blown it. A boat-to-boat infringement on the start line forced them to take two penalty turns and start well after the rest of the fleet who took the left side up the windward leg, with the British taking off to the right.

Saxton said, “The wind was fairly light, it looked difficult, we got a race off fairly quickly. We made a bad start, but we made a great beat and were winning. Then we were still winning at the bottom of the first race when the wind died and it was abandoned,” before concluding, “We are happy and we would have been whatever the scenario today.”

Mason continued by complimenting their main challengers, “The Russians have been our closest rivals this week. We made a good start on them the first couple of days and we had a big jump on them. Then they sailed an incredible middle half of the regatta and really came back strong and were ahead of us for a couple of days. In the end I wouldn’t say we tried to beat them, we weren’t racing hard against them until today. But we managed to stay in front of them and with the race cancelled today we finished second, so we were pretty happy. 2016 is our firm goal. We’ve got Luke and Stu to beat because they are going to continue and a couple of other good British boats. We are going to step our game up and hopefully go to Rio.”

The European bronze medallists, Russia’s Mikhail and Maxim Sheremetyev were thrilled with their result, which ranks as their best to date. Maxim said, “We are happy. I wanted second place, but we are happy. It is our best result ever.”

Next stop for the brothers, as it is for eight of the 470 Men teams competing in the Europeans, is the Olympic Games. 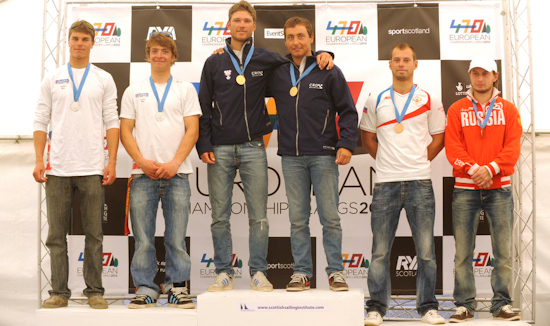 470 Women
With the top four teams going into the Medal Race all in contention for medals the pressure was intense. With a four point separation between the top three teams from Great Britain, Germany and Slovenia, and Croatia just slightly behind, there were quite a few scenarios which could have unfolded today. 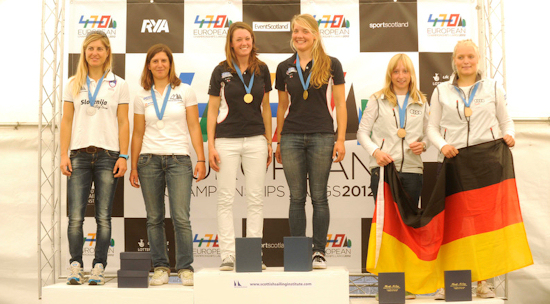 The British win was by no means easy and at one point during the Medal Race, the Slovenians had the gold medal in their hands ahead of Sophie Weguelin/Sophie Ainsworth.

Ainsworth said, “We had a bit of a tense race, we didn’t have the best start and we were playing catch up from then on. But we knew the Slovenians were winning around the first windward mark and we managed to rein them in downwind. We knew we had the Germans behind us, and then on the last downwind the whole fleet came together and we had to get round before them and luckily we did. The Slovenians beat us in the race, but we had enough of a points margin that we won.”

“It was a bit of a test of nerves and we were both shaking afterwards with all the adrenalin. We are ecstatic that we came through in the end. It gives us a lot of confidence. We’ve been sailing well and hopefully we can repeat that at more events and work our way up and win more. Next it’s back to Weymouth, training with Hannah and Sass in the build-up to the Games. Hopefully we can help them win their gold medal at the Games and in 2016 hopefully you’ll see us on the podium.”

Slovenia's Tina Mrak/Teja Cerne sailed a stunning race to claim the silver. “It is a nice result, we are happy. For us the silver medal is like gold!” said Cerne. “Just a bit more and we could have beaten the British girls, but it is fine we are satisfied with our result. It was a good race for us in very difficult conditions, light wind and shifty so we had to be very patient and concentrate all through the race. This is the best result we have ever achieved and has given us a lot of self-confidence that we can sail well and improve places during an event. We are very optimistic going into the Olympics.”

Annika Bochmann/Elisabeth Panuschka (GER) struggled in the conditions to finish fifth and claim the bronze medal. Bochmann was frustrated with their start but delighted with the outcome, saying, “The start was very strange because of the current. Then the shift went to the right and the left end was favoured, so everyone wanted to start there. So we decided not to go left because there were too many boats and maybe a chance of OCS, so we tacked immediately after the start, but there was no shift on the right so we had no chance. Our goal here was fifth, and now we are third. This is our first medal at a senior event. Today we will celebrate with the team, but we fly home early tomorrow morning, so perhaps a bit more celebrating at home!” 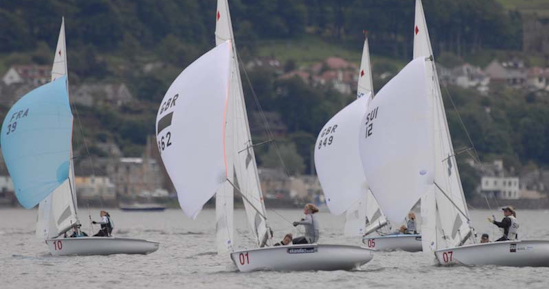 The teams from Slovenia and Croatia are heading home for some rest, relaxation and sun, before they compete at the Olympics. For many of the other teams, they will next face each other at the 2012 470 Junior European Championship in Italy from 9-17 August 2012.

Medal Ceremony
Teams were welcomed to the Closing Ceremony by a traditional Scottish bag pipe player. As well as being awarded the 470 European Championship Medals, medallists also received a Scottish quaich, a traditional drinking vessel from which to enjoy a dram of whisky!

The 2012 470 European Championship was hosted at Largs Sailing Club and organized by the Royal Yachting Association with support from a partnership of UK Sport, EventScotland, North Ayrshire Council, the Scottish Sailing Institute, sportscotland and the International 470 Class Association.

Top Image: Sophie Weguelin/Sophie Ainsworth (GBR) with Ziggy who was out on the water to celebrate © Marc Turner