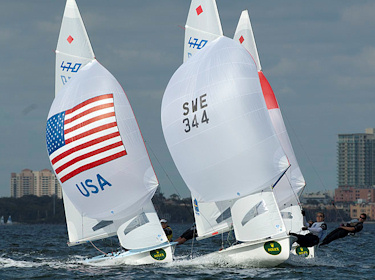 Online registration opened November 1st for US SAILING's 2011 Rolex Miami OCR at the event web site. All competitors and coaches must register and submit entry fees online before January 7, 2011, as there will be no on-site registration. Scheduled for Sunday, January 23 through Saturday, January 29, 2011, this prestigious event is the second stop on the International Sailing Federation's (ISAF) Sailing World Cup 2010-2011 circuit.

For any event in which the number of applications exceeds the event quota by December 3, 2010, event organizers will prioritize based on the Member National Authority’s (MNA) highest appearance on the 2009-2010 ISAF Sailing World Cup final series standings. For more details on the quotas for each event, please read the Notice of Race, which is posted on the event web site, RMOCR.ussailing.org.

The 2010 edition was won by Anthon Dahlberg and Sebastian Ostling (SWE) in the men's 470 and Amanda Clark and Sarah Chin (USA) in the women's.