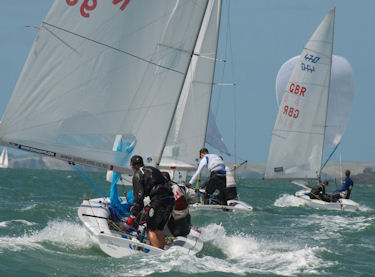 The 2011 New Zealand 470 Nationals are being held at Takapuna Beach, in Auckland. 15 boats have entered, three of which have female crews including the 2010 World Silver medalists Jo Aleh and Olivia Powrie. Also in the fleet are three young Australian crews, Nick Rogers the 2008 and 2004 Olympic Silver medallist who has paired up with new crew Chris Grube, and former 470 World Champion Simon Cooke who is sailing with Carl Evans. Carl represented New Zealand at the 2008 Olympics where he finished eleventh. 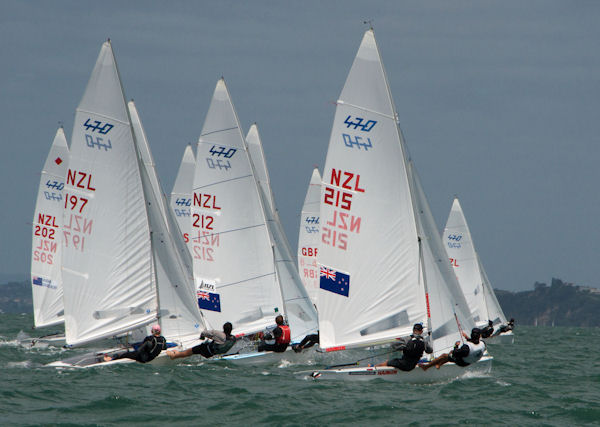 Other strong contenders for top positions in the men's fleet are members of the New Zealand Sailing team, Paul Snow-Hansen and Jason Saunders, who placed 15th at the 2010 Worlds, and Geoff Woolley (three times past winner of the New Zealand Nationals) with Dan Willcox.

Following a day of very strong southerly winds when racing on day 1 was cancelled, day 2 began with patchy south westerlies an overcast sky and flat water - a showcase of Auckland's changeable weather. Racing began in lighter winds around 10 knots, building in strength during the day to gusts of around 20 knots at times. Conditions within each race varied a great deal, patches of light wind amongst shifty, strong skudding wind. The sea state developed a short chop as the wind strength increased, and although the sun burnt off the hazy cloud, it came and went throughout the day.

30+ degree shifts resulted in interesting racing and as a consequence of patchy conditions, line honours for the 5 races sailed were shared amongst a broad number of crews in the fleet. Race one went to Paul Snow-Hansen and Jason Saunders, race two to Mark Overington and Ben Goodwin, race three to Geoff Woolley and Dan Willcox, race four to Snow-Hansen and Saunders, and after a very tight finish between the top three positioned boats, Nick Rogers of Great Britain took the final bullet for the day. 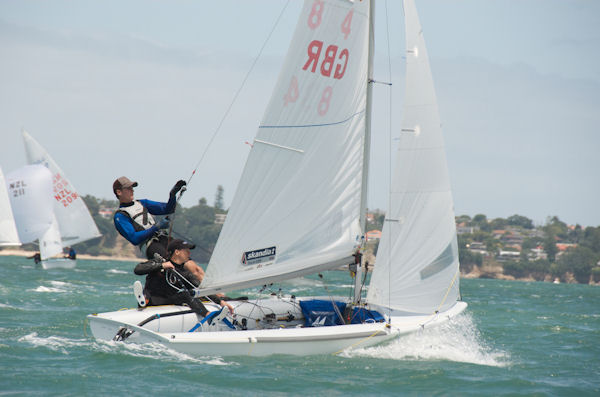 At the end of Day 2, Nick Rogers and Chris Grube are in first place; Jo Aleh and Olivia Powrie are in second and Paul Snow-Hansen and Jason Saunders are in third.

On Monday's day 3, the final day of racing, another four races are scheduled, the weather forcast is for strong north easterlies which will bring with them a rough sea and quite a challenging set of conditions for the sailors to deal with.