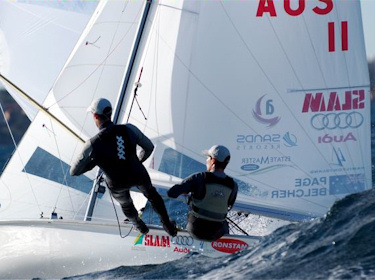 This weekend the Men’s and Women’s 470 classes converge on the Hague, the Netherlands, for the start of their 2010 470 World Championships, sponsored by Delta Lloyd.

With racing taking place over 12-18 July, this year’s 470 World Championships feature 123 provisional entries in the Men’s division, and 65 in the Women’s. Demonstrating once again the global popularity of the 470 as an Olympic class, 40 nations will be represented.

The line-up racing off the Hague features all the top contenders in the 470 class, including past World Champions and Olympic medallists. Australian Malcolm Page, Gold medallist in Beijing, returns with his new crew Matt Belcher having finished fifth at the World Championships in Denmark last year. Currently second in the world rankings the duo arrive at the Worlds on a high having most recently won the 470 Men’s class at Kieler Woche. In fact Page is not the only 470 Men’s Beijing Olympic medallist now with a new crew – bronze medallist, France’s Nicolas Charbonnier now sails with Baptiste Meyer Dieu. They are currently eighth in the ISAF rankings having won this year’s Semaine Olympique Francaise in Hyeres.

Looking to defend their World Championship title will be Sime Fantela and Igor Marenic. Currently no6 in the ISAF rankings, these Croatian sailors have had a good season so far, podiuming in four of the six regattas they have competed in.

“This year we have had great results,” agrees Fantela. “We were fighting for the medal in Palma, we did bronze in Kiel and also in Medemblik. We had good preparations and training and we feel really good. Maybe 10 boats can win the Championship. So we’ll go there and sail our own race and see what happens.”

Also expected to be at the top of the Men’s 470 will be two of the longest standing members of the class. Israel’s Gideon Kliger is currently no3 in the world and in the past has come third in three World Championships in 2008, 2007 and 2006. Since the beginning of this season Kliger has been racing with a new crew in Eran Sela, but despite this they have never finished out of the top eight so far this year.

Like Kliger, the Dutch brothers Sven and Calle Coster have been in the Men’s 470 for more than a decade and they have been no1 in the world rankings almost continuously since the Beijing Games, but have dropped to fifth in the latest ISF rankings. This is to due to the Costers having had a slow start to their season: Sven Coster has had an infection of the L3-L4 vertebrae and is in the middle of a 9-10 month recovery period. In addition, at the Princess Sofia Regatta in Palma he suffered a throat injection so bad that he had to return to Holland for surgery.

“We didn’t sail much in the first five months of this year. The results haven’t been great this year, but everything is focussed on the Worlds - it all feels good,” assures Sven Coster.

Also on top form are two time World Champions in 2008 and 2006 Nick Asher and Elliot Willis (GBR). They won the Delta Lloyd Regatta in the Netherlands this year – so perhaps Dutch waters could be lucky for the British duo again?

In the Women’s 470, the class act this year has been the 2009 European Champions Guilia Conti and Giovanna Micol from Italy, no2 in the ISAF rankings. To date in 2010 they have won both the Princess Sofia Regatta in Palma and Delta Lloyd and have not been out of the top four in the other events they have contested. However hot on their heels are the present World no1s, Ingrid Petitjean and Nadège Douroux from France, who have not been out of the top eight at the six regattas they have competed in this season and have podiumed no less than four times.

They will face strong competition in Lisa Westerhof and Lobke Berkhout (NED), who aside from being the local favourites are also the defending World Champions. In Denmark last year they demolished the opposition to win by 26 points, despite having only sailed together for three months previous. Currently ranked sixth in the world, both Westerhof and Berkhout are highly experienced 470 sailors: Westerhof represented the Netherlands at the Games in Athens while Berkhout and her then helm Marcelien de Koning returned from Beijing with the silver medal.

Despite being unbeatable in 2009, winning not only the Worlds but Skandia Sail For Gold and Keiler Woche, Westerhof and Berkhout had a disappointing start to their 2010 season and have only recently redeemed themselves scoring a silver at the Delta Lloyd Regatta in Medemblik.

“We knew from last year that we still had a lot to do,” admits Berkhout. “We won all the events we sailed last year, but we still had to go through different things, like communication together, etc and we still had to grow as a team. We took the spring for that and it has been a good learning curve and at the Delta Lloyd Regatta we proved we are still one of the best teams. We will certainly have the possibility to be in the top three at the Worlds.”

However as young British duo Luke Patience and Stuart Bithell proved when they finished second at the 470 Worlds last year, predicting form in the 470 is always hard and this year there is a particularly strong influx of Juniors.

In the Hague next week will be both the 2009 and 2008 women’s two person dinghy gold medallists from the Youth Worlds, albeit with new crew – Britain’s 2008 champion Frances Peters is now with Eilidh Mcintyre, while Brazil’s Martine Soffiatti Grael, who won last year, is racing with Isabel Swan, the 2008 Olympic bronze medallist. The 2009 boy’s gold medallist Philip Sparks is competing too, also with a new crew in Chris Grube.

Sparks, aged 17 and from Christchurch on the south coast of the UK, paired up with Grube last September. The duo have been competing at all the events they can including Kieler Woche, Delta Lloyd, Hyeres and Rolex Miami OCR this year, but he admits: “We have been quite inconsistent because we haven’t had enough time yet to put a consistent series together across the wind range, so it is hard to predict how you think you will do.” This will be Sparks’ first time at a 470 World Championship. “I am looking forward to it – a proper event that counts for something and involves a bit of pressure it would be good,” he says.

Reigning World Championship Sime Fantela and Igor Marenic who Junior 470 World Champions in 2007 advise that of those who have just left the Juniors, France’s Sofian Bouvet and Jeremie Mion should be watched. So far this year have finished inside the top 10 at all the regattas they have competed in and in 2009 were both the 470 Junior World Champions and 470 Junior European Champions.