The sailors are ready, 40 brand new 470s are lined up in the boat park, the Championship has been officially opened and racing will get underway tomorrow, Friday 17 December, for the teams gathered in Doha, Qatar ready to do battle for the 2010 470 Junior World Championships. 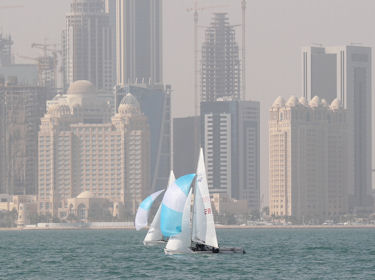 Organized by the Doha Sailing Club and the Qatar Sailing and Rowing Federation, the 2010 470 Junior World Championships is a “pay and play” event. The competitors who have flown in from around the world will be competing in gleaming new 470s supplied by the Organizing Committee. The concept of supplied equipment is a first time experience for many of the teams, but one which the 470 Class is keen to promote. With supplied equipment, all teams will compete on an equal footing with only minor adjustments allowed to settings as the boats will be rotated between the two fleets. Teams got on on the water today for some boat familiarization – and there were many smiling faces as they enjoyed the new boats supplied by BlueBlue of Poland. 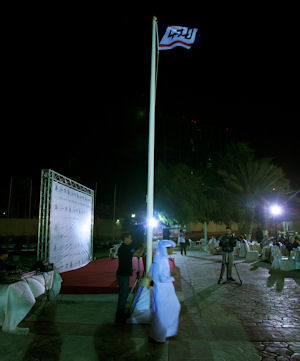 In the men/mixed fleet, hot favourites are the seemingly unbeatable team of Sofian Bouvet and Jeremie Mion (FRA). They are the defending 470 Junior World Champions and reigning 470 Junior European Champions and have enjoyed their position as the world's top junior 470 team. A successful Worlds title defence is certainly on their wish list to add to their every growing trophy cabinet. We have seen the Trophies prepared by the Organizing Committee – and they are big and shiny! "We have a good feeling about the Championship," commented Mion. "We like the idea of supplied equipment and feel happy after the training day yesterday," he continued. The pair are already a force to be reckoned with on the senior 470 circuit and hold a world ranking of #12. Whilst there is always room for others to move on up, any team with serious intent on winning the 2010 Junior World Championship title will have to put in a world class performance from the outset to take the World Championship away from Bouvet and Mion. According to Mion, they will approach this Championship the same as others, "We will aim for some good results on the first day, with three races. If we do well at the start of the Championship, it makes it easier!"

Based on recent performances one of their main contenders will be Daniel Zepuntke and Dustin Baldewein (GER), who finished third at the 2010 Junior Europeans, and were only a few boats behind Bouvet and Mion at the 2010 470 Worlds in The Hague back in July 2010.

Davide Vignone and Matteo Ramian (ITA) will be keen not to repeat their mistakes at the 2010 Junior Europeans, where a disqualification and a couple of early starts pushed them out of any contention and down into a lowly result of forty. When not notching up letter scores, the pair secured some great results, including three second places. They have it in them and are a proven team – with a fifth at the 2009 470 Junior Worlds, and in the same year they secured a fifth at the ISAF Youth Sailing World Championships in the 420. 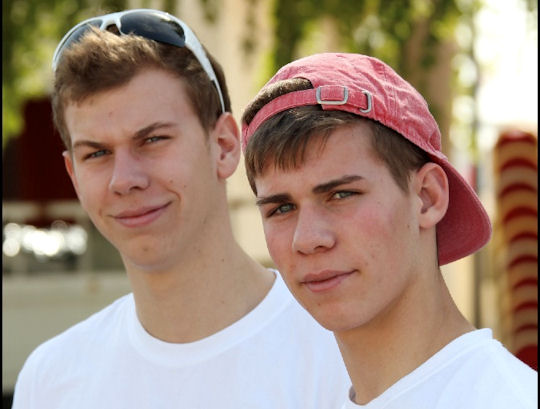 Another sailor that is difficult to intimidate is Julian Autenrieth from Germany. Optimist World Champion in 2006, Autenrieth is racing the 470 with his older brother Philipp. They started in the 470 last year and finished 14 at the 2010 470 Junior Europeans. Autenrieth is very happy with the supplied equipment concept, “We just arrive here and go sailing – it is really good. If we didn't have the charter boats it would be more expensive to bring our own.” The weather conditions which look set to face the competitors are fine for Autenrieth, “We are happy with light and shifty conditions. We are aiming for a top 10 finish.” For the brothers, their optimism is also boosted by the fact that they normally sail a 470 built by BlueBlue so are feeling familiar with the boat. And on being in Doha, “Qatar is a really cool place – it's great. And after racing, I get home on 23 December and then go skiing the day after Christmas!”

Germany is fielding a significant team, with seven teams in the Men/Mixed fleet and six in the Women's.

Two young teams from Qatar will be carrying the home flag. Whilst feeling the pressure is on them as the home team, one of the helms Waleed Al-Sharshani was not going to be pushed on a predicted result, “We hope to do our best. We just want to do good and enjoy the Championships." Al-Sharshani, who will be celebrating his birthday on Saturday, is planning to build on his experience from competing at the 2009 470 Junior Worlds in Thessaloniki, Greece where he finished 52 with crew Hassan Al-Tamimi. Naturally, the Qatari teams are very proud that their country is hosting the Championship, “We are pleased to welcome all the nations. For us, we will take the experience from this Championship and move forwards with our sailing.”

Ku Anas Ku Zamil from Malaysia and his crew Mohammed Hafissudin Mazelan are as they put it, “quite nervous as it looks like there might be quite a bit of wind.” A reference perhaps to the sandstorm that blew here a couple of days ago, although the forecast is set for slightly lighter conditions as the Championship progresses. But regardless of the weather predictions, the Malaysians are aiming high as Ku Zamil declared, “We are aiming for a top three place,” which he swiftly countered with a smile recognizing the pressure he was putting on himself. 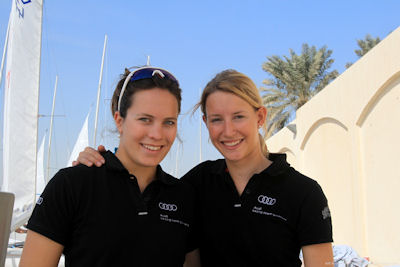 Tina Lutz and Susann Beucke (GER) hold the highest spot on the ISAF Sailing World Rankings of all the women's team here in Doha, at #22. A good indicator of their performance on the senior circuit, where they most recently finished twelfth at the 2010 470 Europeans in Istanbul. Another former Optimist World Champion, winning in 2005 the year before team mate Julian Autenrieth, Lutz made the switch to the 470 Class several years ago. Tina finished fifth at the 2009 470 Junior Worlds and fourth at the 2008 470 Junior Worlds – so perhaps we can predict a shift up a gear to a podium finish in 2010.

Japan is fielding two women's teams, including Saiko Goto who is helming JPN3 and finished fifteenth at the 2008 470 Junior Worlds in Poland as crew. Saiko is sailing here as helm, with new crew Hiromi Nishiyama. The 470 sailing is a very popular class in Japan, particularly within universities and colleges. Catching up with Saiko, she commented, “I am excited to be here and want to have fun. My aim is to secure a medal.” Saiko and Hiromi were training in Japan for a month prior to the Championship. 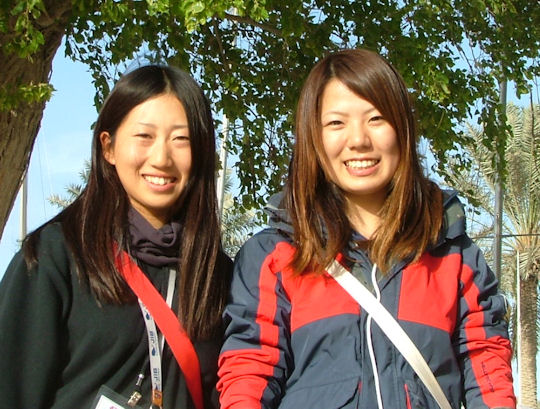 For Yana Markova and Iva Nedeva from Bulgaria a top performance here is critical – their funding for 2011 depends on it. The pair will be aspiring to achieve a top 8 finish – which if they do will not only deliver them one of their best ever results but also selection for the Olympic Squad and the funding they need to support their campaign through 2011. “We aim to be in the Medal Race, and pray to be in the top eight boats,” said a determined Yana. The pair finished twelfth at the 2010 470 Junior Europeans and 17th at last year's 470 Junior Worlds. Commenting on Doha, Markova said, “This is perfect. We like the country – it's a totally different culture. It's warmer than Bulgaria right now – we have gone from snow to desert! Apart from the sailing, this is going to be a totally new experience.” And on the supplied equipment, “It is the same for everyone. Some sailors don't have new equipment – and this boat is newer than ours in Bulgaria.”

Sailors from 15 nations are competing in Doha. The 470s will be rotated between the Men/Mixed and Women's fleets, with a different fleet scheduled to start racing each day. For day 1 of racing, with three races scheduled for each fleet, it will be the Men/Mixed Fleet who will take to the water first, with the warning signal scheduled for 1030 hours local time. The warning signal for the Women's fleet will be after 1230 hours. Sailors have been allocated bib numbers for identification, which are recorded in the entry list and will be used in the results.

The Championships will be contested over five racing days, with 4 days of qualification before the Final and Medal Races on Wednesday 22 December.

Away from the demands of the race course, Saturday 18 December is Qatar National Day and a declared lay day, giving the teams the opportunity to enjoy some time to explore the intriguing city of Doha.

Tracking is being provided by TracTrac for all races and can be followed through the 2010 470 Junior World Championship website: www.juniorworlds.470.org

The Championships is sponsored by Qatar Airways, Qatar Development Bank and the Qatar Olympic Committee.