'Get out of Jail' Card for the Germans 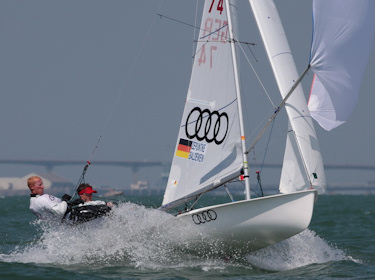 Tim Elsner and Oliver Szymanski were one of a number of German teams who made a lucky escape after today’s final Gold Fleet race was abandoned at the 470 Junior Europeans in La Rochelle today.

The German coach had gathered a number of the German squad for some tuning and rig set-up before the start of this afternoon’s race. Too late, they realised that they had sailed a long way above the start line with just five minutes to the start gun. They set spinnakers to try and get back to start in time, but with the current pushing them back upwind, returning to the line seemed to take an eternity.

In competitive terms, it really was an eternity as the bulk of the fleet were already half way to the windward mark by the time the Germans crossed the start line. A disastrous scenario for Elsner and Syzmanski looking to defend their position of 2nd overall in the 86-boat fleet, while their compatriots leading the girls’ championship, Annika Bochmann and Anika Lorenz, had been similarly stranded.

However, race officer Alain Corcuff was juggling with some difficult and unpleasant choices, as he explained. “We had a good start with 9 or 10 knots of wind from the west, even if some boats were late for the start because they were training far away upwind,” he said. “We then put up the Oscar flag [which signals that the sailors are permitted to use kinetics such as unlimited pumping of the spinnaker], but then the wind dropped to just 3 knots at the bottom of the course. Some time after, the wind dropped below 3 knots, and we saw the Silver Fleet were still rocking, pumping, doing what they wanted because of the Oscar flag. But it looked not like a race, but a circus. Eventually I decided that with the wind now very light at the bottom of the course and very shifty, we had to abandon.”

Meanwhile, guess who was leading the Gold Fleet... If you’ve been following the story of this regatta perhaps it will come as no surprise that despite even the fickle conditions today, it was again Sofian Bouvet and Jérémie Mion who held the lead when the race was abandoned. The sailors who have already racked up an extraordinary set of scores, 10 race wins and one 2nd, were unhappy not to have been able to seal another win today for themselves, but also for their French team mates who were also well placed. “We are disappointed,” said Mion. “We were first and didn’t know why they stopped the race. We have done races in less wind and shiftier conditions. For us it doesn’t matter so much, but for FRA 8 [Kevin Peponnet & Julien Lebrun], they could be 2nd tonight.”

The mood in the German camp was one of slight embarrassment but even greater relief at having survived that potential catastrophe. Tomorrow Elsner and Szymanski will go into the Medal Race well placed to defend silver, with Peponnet/ Lebrun in bronze but just 2 points in front of Daniel Zepuntke / Dustin Baldewein (GER) in 4th place.

In the girls’ fleet Annika Bochmann and Anika Lorenz (GER) hold a 20 point lead over Great Britain’s Frances Peters and Eilidh McIntyre, the only team that can possibly take gold away from them. Last year’s champions Victoria Jurczok and Josephine Bach, were disappointed with how they have sailed this week. “We’re happy to race for the bronze medal tomorrow,” said Jurczok. “We don’t deserve anything more. If we had won gold it wouldn’t reflect well on the standard of women’s sailing, so we will be satisfied if we can keep bronze.”

With the top 10 of the 86-boat fleet now separated out for the Medal Race, the remaining competitors in the Gold and Silver Fleets will race one final heat at midday tomorrow, while the Medal Race contestants will wait until 3pm. The 10 finalists will fit GPS units to their boats and sailing fans from around the world will be able to tune into the live tracking to witness the climax of the 470 Junior Europeans.

To follow the Medal Race live tomorrow at 1500 hours (local time in La Rochelle), click on this link: http://portal.georacing.com/470junioreuropean2010