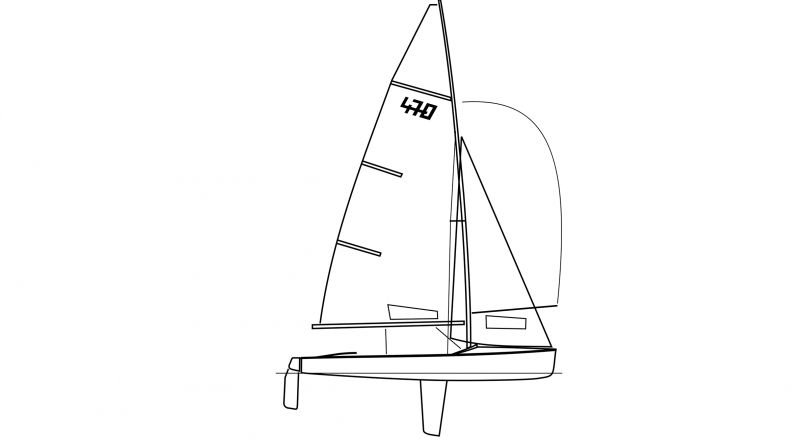 The 470 is an Olympic Class Dinghy recognised by ISAF. Sailed by both men and women, it was designed in 1963 by the Frenchman André Cornu as a modern fibreglass planing dinghy.

The 470 is an Olympic Class Dinghy recognised by ISAF. Sailed by both men and women, it was designed in 1963 by the Frenchman André Cornu as a modern fibreglass planing dinghy.

The name is the overall length of the boat in centimeters (the boat is 4.70 metres long). The hull is fiberglass with integral buoyancy tanks.

It is a popular class of dinghy, offering a good introduction to high- performance boats without being excessively difficult to handle. It is not a boat designed for beginners. It has a large sail-area-to-weight ratio and is designed to plane easily. Most sailors get substantial experience in a more stable and less demanding dinghy before beginning the 470.

The International 470 Class is the class of boat used for both the men’s two person and women’s two person dinghy events at the Olympic Games. Used as Olympic equipment since 1976, where the class was sailed as an open event before the introduction of separate events for men and women in 1988, the 470 is sailed in more than 61 nations around the world.

A strict one design class, the 470 has proved its pedigree as an Olympic class, being a high performance sailing dinghy suitable for body weights from all continents and to performing across a wide range of weather conditions. Across the 9 Olympic Games in which the 470 Class has been raced, more than 18 different nations have secured Olympic medals in the men’s and women’s events, demonstrating the depth of participation and talent.

The International 470 Class is responsible for the organization and administration of the 470 Class around the world. With 25% of the athletes at the Olympic Games competing in the 470 Class, the Class is committed to ensuring their interests and the broader interests of 470 sailing are represented and to encouraging, promoting and developing the 470 Class throughout the world.

In 1969 the class was awarded ISAF International Status and it has been an Olympic class since first featuring at the Montreal Olympics in 1976. In 1988 the first Olympic women's sailing event was sailed in the 470, as the first step in increasing the number of women competing at the Olympic Games.

The boat can be sailed competitively in a wind range of wind and sea conditions.